Soil test data from over five million samples collected from Wisconsin farmland and analyzed by both public and private Wisconsin Department of Agriculture, Trade and Consumer Protection certified soil testing laboratories has been summarized every 3 to 5 years since 1964. Summarizing soil test data is useful for not only identifying broad fertility trends, but also for evaluating fertilizer, lime and manure management practices, isolating areas of unique, localized fertility conditions requiring special management and for identifying soil areas having a potential for a high environmental risk to water quality.

Available P and K (Bray-1), along with other soil test parameters were recently summarized for approximately 1,080,000 soils tested during 2005-09. This represents approximately a 58% increase in samples compared to the 2000-04 summary period. Nearly 90% of these were in the medium and fine texture category and approximately 9% were coarse-textured soils. The balance was made up of organic soils and red soils from eastern Wisconsin.

Average soil test P for all Wisconsin farm soils decreased from 53 ppm in 2000-04 to 51 ppm in this 2005-09 summary period. Applying no more than the recommended rates of phosphate fertilizer and/or crediting manure nutrients have become more common practices on Wisconsin farms and is reflected by this change in the long term trend which has seen increasing soil test P levels. For the past five years, 54 of 72 Wisconsin counties had either no increase or a decrease in soil test P after regular upward trends in soil P levels in the state since 1964.

The average soil test P for the coarse textured soils was 80 ppm as compared to the medium/fine-textured soils where the average was 50 ppm.   The counties where soils are intensively managed for potato production had the highest soil P levels. Optimum soil test P levels required by potato and processing crops grown on coarse-textured soils can be considerably greater than for most other agronomic crops. There were some large changes in these counties including a 53 ppm decrease in the average for Oneida County and 45 ppm increase in Portage County. Soil test P changes in counties that predominantly contain medium and fine textured soils were relatively minor (5-10 ppm) by comparison. 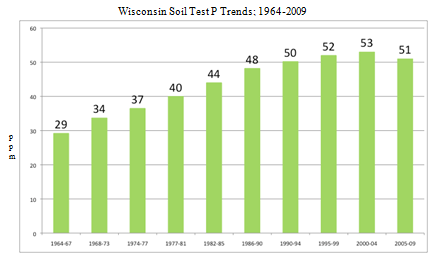 Soil test K for all soils in the summary has decreased from 134 ppm in 2000-04 to 126 ppm in this 2005-09 summary period. This is the lowest average level since the 1982-85 summary period where the average was 124 ppm.   At the time of the first summary in 1964-67, average soil test K was 83 ppm. Increases in soil test K were relatively high (averaging 7 ppm per summary period) beginning with the 1964-67 summary period until the 1995-99 summary period. During the last two five-year summary periods, the change has been of this same magnitude but in the opposite direction going from 141 ppm to 134 ppm and now to 126 ppm.   Most counties have average soil K values on the upper end of the optimum level for corn (71-130 ppm) and alfalfa (71-140 ppm) production or somewhat above the optimum level. At optimum soil test levels, the amount of recommended potash is equivalent to crop removal. The average soil test K for coarse-textured soils is 103 ppm compared to 128 ppm for medium and fine textured soils. This reflects the lower CEC on these sandy soils and the higher potential for rapid change under intensive cropping. Either a decrease or no change in average soil K level was seen in 63 of the 72 counties after regular upward trends until about ten years ago. 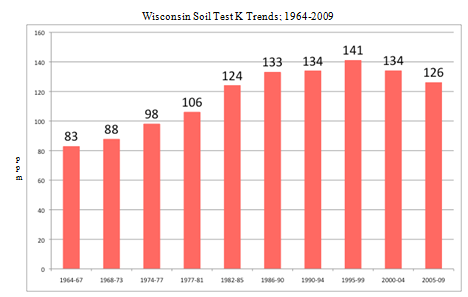 The changes in soil test P and K show widespread adoption of sound fertility management practices necessary for profitable crop production as well as good environmental stewardship. The trend toward a reduction in soil test P and K seen in many counties is encouraging evidence that nutrient management planning is being implemented on more acres. Continuing to monitor soil test data will help educators and farm advisors develop strategies necessary for Wisconsin farmers to maximize crop production while recognizing and minimizing environmental concerns. However, only good, representative sampling and testing of individual fields can provide growers with the data needed to make informed nutrient application decisions to achieve economically optimum yields while minimizing environmental impacts.

You may access a searchable data base for Wisconsin soil test results at http://uwlab.soils.wisc.edu/soilsummary/