Influence of crop rotation and nitrogen fertilizer on oat yield

Current UWEX nitrogen (N) application guidelines for oats are 40 lb/ac for soils with 2 to 10% organic matter and 60 lb/ac for soils with less than 2% organic matter. When oats follow soybean, UWEX guidelines would suggest no need for N fertilizer on most mineral soils, as there is a 40 lb/ac soybean rotation “N credit”. This credit reflects the fact that yields of small grain crops following soybean are optimized with 40 lb/ac less N compared to when following corn or other grain crops. This N credit does not mean that growing soybean results in an extra 40 lb/ac of N in the soil at the end of the season. In fact, the net N balance during a soybean is often zero and become negative with greater yields (i.e. more N is removed as grain compared to the amount of N fixed by the plant).

To evaluate optimum N rate for oats following corn or soybean, we established an N rate study in 2010 at the Lancaster Agricultural Field Station. We applied four different rates of ammonium nitrate fertilizer (0, 40, 80 and 120 lb/ac of N), when oats were 2 inches tall. The oat variety was Esker and planted April 14th, 2010 at a rate of 3 bu/ac. Deep soil cores (0-1’ and 1-2’) were collected prior to planting, one value per rotation, and the PPNT values were 85 ppm following soybean and 87 ppm following corn. While the PPNT has not been calibrated for oats, we can use the PPNT to confirm that these sites were similar in amount of residual nitrate. For comparison, based on these PPNT levels, if we were growing winter wheat, we would reduce N applications by 35 to 37 lb/ac of N (subtract 50 ppm from PPNT value). 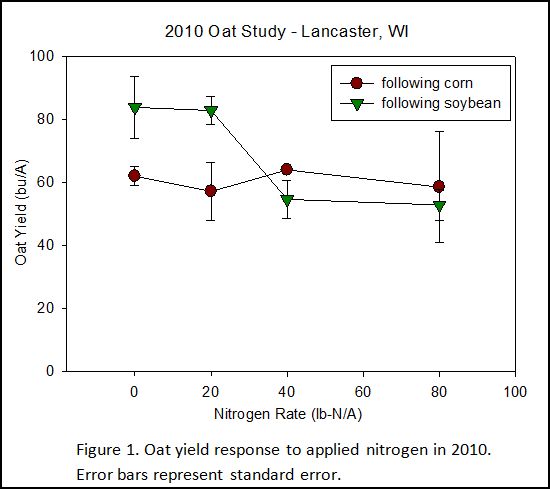 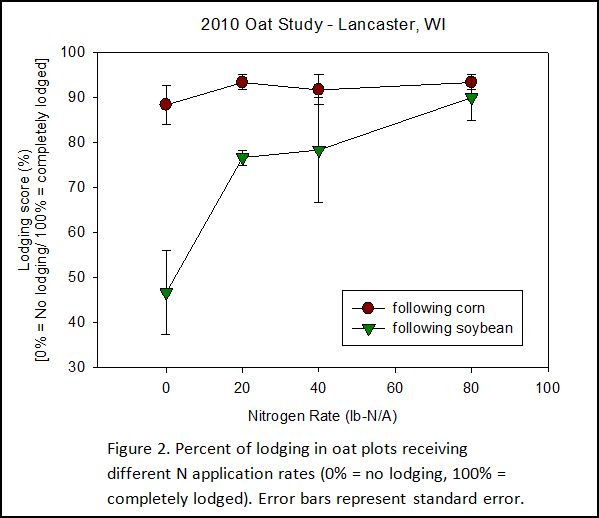 These results clearly support taking the 40 lb/ac “N credit” for oats following soybean. Any application of N to oats following soybean resulted in decreased yields, severe lodging and a reduction in economic return. When oats follow corn in a high residual nitrate environment, it also does not pay to apply N to oat. If we were to apply the PPNT credit based on a credit calculated for winter wheat, the recommended application rate would effectively be 0 lb/ac of N. Since the N rate of 0 lb/ac was the economically optimum N rate for oat following corn, this data would suggest that PPNT could be used for oats in a similar manner as used for winter wheat.

Recent research has verified the soybean rotation credit for winter wheat (goo.gl/NpELO), as well as the negative consequences resulting from over-applying N. Small grain crops are an excellent crop to grow to increase the length of your crop rotation, but it is important select your N rates wisely. This trial will be repeated again in 2011 to verify the use of PPNT for oats.