Radish as a cover crop

There has been much recent interest in planting forage radish or oilseed radish (Raphanus sativus) following winter wheat or corn silage harvest. Some of the forage radish varieties sold as a cover crop seed are cultivars of the Daikon variety (a Japanese table radish) and have been selected for large taproot size. These selections, derived from radish grown at the University of Maryland, are trademarked and sold as Tillage Radish™ and GroundHog™. Oilseed radish cultivars are also available (e.g. Adagio), may not trademarked, and generally have stubbier taproots compared to cultivars of the Daikon forage radish. Some radish is sold as VNS (variety not stated). Use caution when purchasing VNS seed as it has not been selected for large taproots and you will not know what type of radish you are getting. While research related to using radish as a cover crop is in its infancy, there are some guidelines that we can suggest for use. In general, proceed with care if interested in incorporating radish as a cover crop into your cropping system.

The primary benefit of growing radish as a cover crop is its ability to perform “bio-tillage” by growing a large taproot that can greatly disturb soil in the upper 8 inches (or deeper). The radish decomposes quickly in the spring, leaving large holes in the soil. This can be beneficial for no-till growers or for growers who are looking to reduce spring tillage. The taproot may penetrate through compacted soil layers and alleviate soil compaction. However, it remains unclear on how effective radish can be for breaking through a dense plow plan. Currently, we do not have any data that quantifies this “bio-tillage” benefit in Wisconsin.

Another benefit of radish is that it is an excellent scavenger of nitrogen (N). It can be used to capture excess N applied to the previous crop. However, this uptake is limited to the fall growth, as radish does not survive Wisconsin winters. The taproots decompose quickly (and with quite an odor!) in the spring, while a rye cover crop will survive winters and continue to take up N in the spring. The overall amount of N taken up by radish roots and above ground biomass can exceed the amount of N taken up by above ground biomass of rye. Thus, there is a trade-off between the N scavenging cover crops: radish will scavenge more N in the fall, but rye will continue to scavenge in the spring.

It remains unknown if radish functions as a green manure by providing an N credit. It is also unclear if the release of N captured in the radish will be released in sync with N uptake of the subsequent crop (most often corn). No data exist which show that N rates should be reduced after radish. In addition, we have heard that it is recommended that 60 lb/ac of N be applied with a planting of radish. This was likely based on research conducted in Maryland where adequate levels of residual N were not expected because of the soil texture (loamy sand) and the fact that the previous crop received only a moderate amount of N (no carry-over of N). Thus, the researchers applied N at radish planting to ensure a good stand. Radish will need adequate N to grow and provide N capture and other soil benefits. However, we would expect that on most silt loam to clay loam soils, where adequate N was applied to the previous crop, that residual N in the soil will be adequate for radish growth (Fig. 1). There is no published research on optimum soil test nitrate or N application to ensure proper growth of radish as a cover crop. However, this issue is moot if opting to apply manure at or near the time of cover crop seeding. 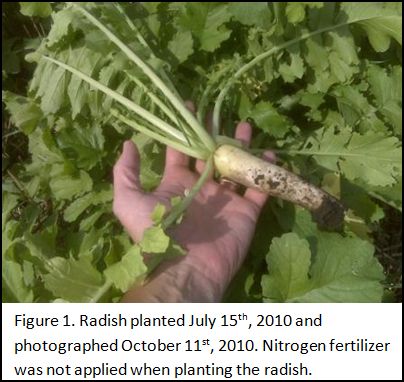 Radish establishes quicker than legumes, but less rapidly than grasses. It will provide good groundcover and controls weeds through a dense canopy. Recent research from the University of Maryland has demonstrated the effectiveness of radish as a weed suppressor (Lawley et al., 2011; “Forage radish cover crop suppresses winter annual weeds in fall and before corn planting.”).

Using radish as a cover crop has become popular with growers who have an “early” harvest crop in rotation (e.g. winter wheat, vegetable crops). The early harvest date of these crops also makes the land available for manure applications. Radish can be planted before, after or with manure applications. It can also be grown in mixture with other cover crops, both legumes and grasses. Late-season plantings of radish after corn silage may have its limitations in Wisconsin. It is unclear what benefit you can get when planting later in the summer (late August to mid-September). In a field trial conducted in 2010, we were unable to plant cover crops (radish and rye) until September 21st and experienced very dry soil conditions at the Arlington Agricultural Research Station after planting. The late planting and lack of available moisture was detrimental to the radish, but not rye (Fig. 2). 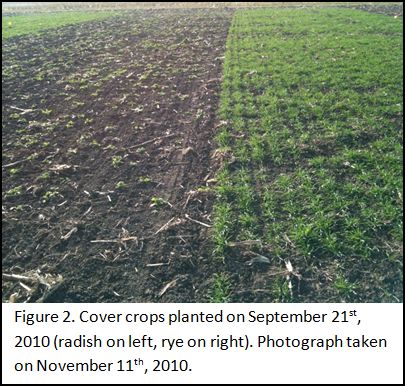 Treat tillage radish as an experiment when growing it for the first time. Talk with crop consultants or other growers that have had success. We are working on developing scientific-based recommendations for management of radish grown as a cover crop. Currently, our recommendations would be to experiment only in systems where radish can be planted in mid-July to mid-August. Also, it is always a good idea to alert your neighbors that you have planted tillage radish, as they can be quite pungent in the spring when decomposing in the field.