The WIDATCP Wisconsin Pest Bulletin noted a significant influx of black cutworm moths from the southern U.S. moved north by storm fronts during the first three weeks of April. Thus far, over 457 moths have been captured in 30 Wisconsin pheromone traps. 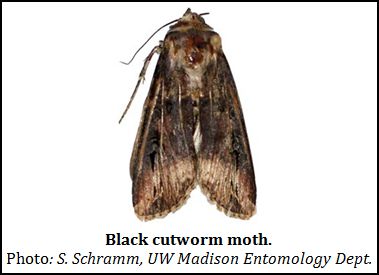 Based on Wisconsin trap captures and a degree-day biofix date of April 11 this year, a cutting period starting May 30 is anticipated.

Concerns over damage are greatest during the first ten days to two weeks after corn emergence. Scout fields for early feeding damage and presence of larvae. Continue to scout through V5 stage corn. Focus attention on corn fields which are most attractive for black cutworm oviposition.

Late-planted corn fields are most heavily damaged during an outbreak of black cutworm because plants are smaller and more vulnerable when larvae are at the “cutting” stage.

Initial damage to corn seedlings by early instar black cutworm larvae shows up as holes or irregular feeding injury to corn leaves. Small larvae are not yet able to cut plants and this injury is not economic. However, it does indicate potential for cutting or tunneling into the base of the plant by larger larvae. By contrast, seedcorn maggot and wireworm feeding may also occur early season, but their feeding is confined to lower leaves (first and second leaf) and below ground. 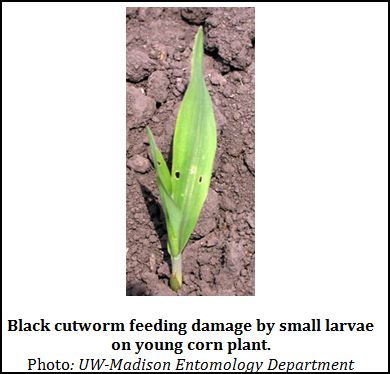 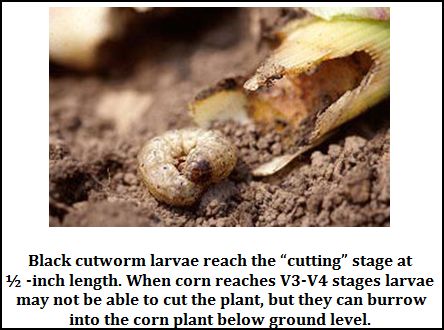 What can you expect from Bt Corn and Insecticidal Seed Treatments for black cutworm control?

Dr. Michael Gray, Entomologist at the University of Illinois Department of Crop Science posted an informative article in last week’s Bulletin newsletter titled ‘Black Cutworms, Bt Corn, and Insecticidal Seed Treatments: Recent Research Developments’, Issue No. 4.
The article summarizes a research publication in the April 2011 issue of the Journal of Economic Entomology (Vol. 2, No. 104, pp. 484-493, DOI: 10.1603/EC10360) that sheds some light on interactions of black cutworm larvae with Bt corn and one insecticidal seed treatment. The work was done by entomologists at University of Guelph, Ridgetown Campus in Ontario, Canada.

I encourage you to read Dr. Gray’s short summary of this research by clicking the article title above for more information. (Keep in mind that not all Bt corn hybrids include black cutworm in the spectrum of control. See the Handy Bt Trait Table, this issue, for more information.)