When deciding to make any late-season, rescue application of nitrogen (N), you will need to evaluate your N management program relative to the potential for N losses. Heavy rainfalls can cause N losses due to leaching or denitrification; Dr. Carrie Laboski provides some guidelines in the previous Wisconsin Crop Manager article Assessing the Potential for Nitrogen Loss from Heavy Rainfalls (Laboski, 2011). If most of your N was applied pre-plant and heavy rainfall events occurred early to mid-growing season, then further investigation into N deficiency may be warranted. If you have split-applied your N fertilizer and there has been little potential for N loss, late-season N deficiency is unlikely. If you think that your corn may be N deficient during the late vegetative stages, scout your fields to evaluate any visual effects of N deficiency (e.g. lower leaves have yellowing in midrib, often called “firing” of lower leaves). Nitrogen deficiency (or sufficiency) can be confirmed with a plant tissue test. Follow the plant tissue sampling protocols set forth in the following documents to ensure reliable results: Troubleshooting fields using plant analysis (Laboski, 2010) and Sampling for plant analysis (Kelling et al., 2000).

If you have decided to apply a late-season application of N, the N fertilizer source and application method are important selections to make. Late-season foliar (or “over the top”) applications of UAN will result in moderate to severe burning. Research from the University of Missouri indicates that for 2 foot tall corn, broadcast applied 32% UAN results in much greater burn severity compared to broadcast ammonium nitrate or broadcast urea (Nelson et al., 2005). Between row applications resulted in little damage. The authors do not recommend broadcast applications of UAN when the corn is greater than 1 foot tall, while between row applications (of UAN and other N sources) are recommended when the corn is between 1 and 4 feet tall (when applications are warranted). It should be noted that this study was conducted on fields that had high leaching losses and were expected to respond to rescue applications of N (Nelson et al., 2005). Foliar application of UAN is not recommended after the V7 growth stage because the excessive burning of leaves can result in a yield decrease (Sawyer, 2003). Recently, foliar application of 28% UAN, at a rate of 10 gal/ac (30 lb/ac of N) was applied to corn at the V8 growth state at the Arlington Agricultural Research Station. This resulted in moderate to excessive leaf burn (Fig. 1 and Fig. 2). However, new leaf development has occurred and these leaves have no burn symptoms. We will have to wait to the end of the year to know the full effect of this application, but with other fertilizer sources available, it was clearly not worth the risk. 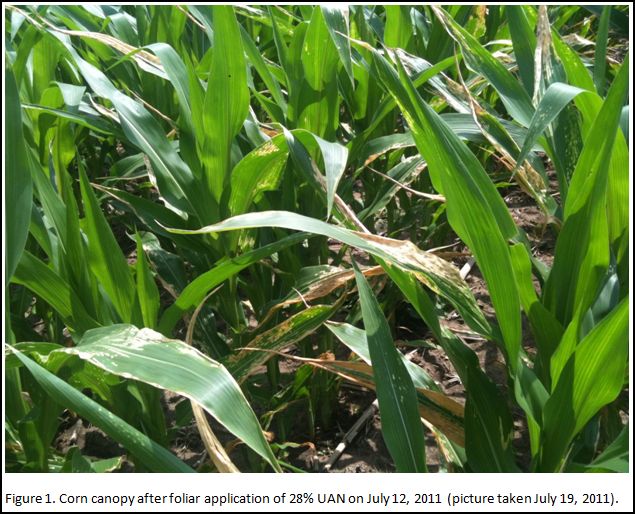 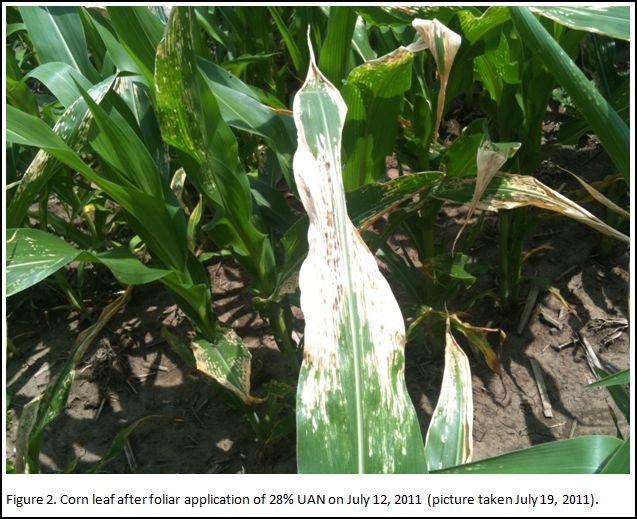 Foliar application of UAN has been identified as the least recommended option for N application (Fernandez, 2010). Early in the growing season, foliar application of UAN may still cause leaf burn, but it will not likely to lead to a yield reduction. Sawyer (2003) recommends no more than 90 lb/ac of N as UAN applied at the V3 stage or younger and no more than 60 lb/ac of N as UAN between the V3 to V7 stage. When the corn is too tall to risk damage during injection, UAN should be applied with drop nozzles between rows. If dry fertilizer is applied over the top of the corn canopy, urea and ammonium nitrate will cause some fertilizer burn if the granule falls in the whorl. It is best to apply dry fertilizer products when the canopy is dry.

In general, planned split-applications of N, even when they include applications made past V7, are preferable to applying all of the N pre-plant and relying on large (30 lb/ac or more of N) foliar applications as a rescue application. Split-applications prevent large amounts of applied N to be subject to environmental losses early in the growing season. If rescue applications are your only option consider the N source and application location. Stick to products like UAN, urea, or ammonium nitrate; slow-release fertilizers are not recommended late in the season. However, inclusion of NBPT (e.g. Agrotain®) would be beneficial for use with urea when surface applied to reduce volatilization (Fernandez, 2011). Further, avoid broadcast or “over the top” applications if possible to avoid risk of leaf burn and the potential decline in yield that would occur. If broadcast application of 28% or 32% UAN is your only option fully consider the potential tradeoffs between potential yield decrease (from leaf burn) and the potential for yield increase.