Japanese Beetle – Scouting and Thresholds for Soybean and Corn

Adults (beetles) are being reported in soybean or corn in Columbia, Dane, Jefferson, and Eau Claire counties, and other locations in the state on fruit and ornamental crops. 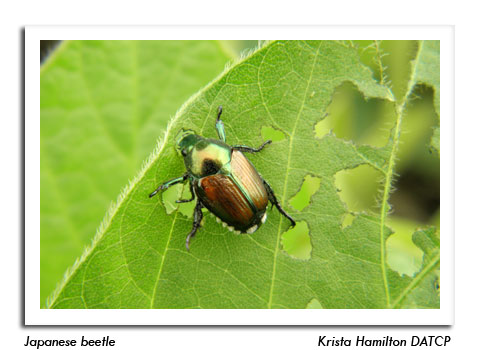 It is easy to overestimate defoliation percentage, it often looks worse than it is. In her recent Iowa State University Integrated Crop Management newsletter, Extension Entomologist Erin Hodgson referred readers to this leaf defoliation resource to help you judge what percent defoliation is occurring.

Scout leaf defoliation throughout the field, not just field edges where Japanese beetle aggregation and feeding can sometimes be more concentrated. Field edge/border row treatments may be sufficient if damage is confined to this area. Sample from 10 different plants throughout the field choosing a trifoliate leaf from the upper, middle, and lower canopy on each plant. This will give you a 30 leaf sample to assess whether the feeding is progressing down the canopy or only in the upper canopy. 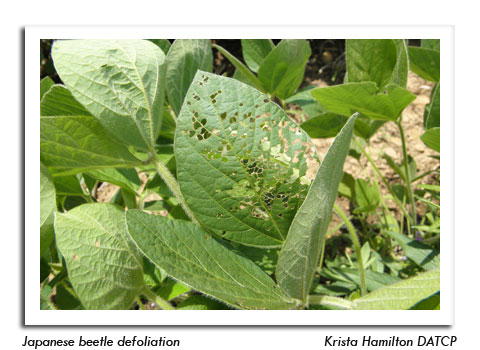 Consider a foliar insecticide treatment during tasseling and silking if there are three or more beetles per ear, silks have been clipped to less than 1/2-inch AND pollination is less than 50 percent complete. (Field and sweet corn).

Aim for a representative field sample as Japanese beetle may aggregate or clump near corn field edges. Edge/border row treatments may be sufficient if damage is confined to this area, but scout inner field locations to make sure.