Weeds could be Tough to Control with POST Herbicides this Year

Corn and soybean growers have encountered several challenges with controlling weeds with herbicides this season, and the current weather may cause that trend to continue.  There have been a number of challenges, and most of them have been related to dry soil conditions.  Unfortunately, the 7 to 10 day forecast doesn’t look to bring us much rain. Additionally, the early spring and the accumulated GDD’s early in the season with subsequent temperatures in May and early June fluctuating between normal and above normal has added to the problem. I first discussed the early spring concerns, particularly for no-till growers, in an article on May 3rd: https://ipcm.webhosting.cals.wisc.edu/download/wcm-pdf/WCM19_4.pdf.  Since that time, there are several common scenarios that have played out that may help direct your scouting and management approaches for POST applied herbicides.

First, many parts of the state were wet for the first couple weeks of May, so most planting got underway after the first week of May in many areas.  Unfortunately, most areas received very little rainfall the latter half of the month, and subsequently, many of the preemergence herbicides didn’t receive enough rainfall to fully ‘activate’.  In some of those fields, the POST herbicides were applied early, and those fields need to be scouted again for later emerging weeds.  Some weeds can often germinate later into the season and be a problem to control, such as: giant ragweed, pigweed species, yellow foxtail, fall panicum, and large crabgrass, and these fields may need a second POST herbicide application or pass of row cultivation to clean them up a final time.

In another scenario, the POST still has not been applied and the weeds are getting large.  As the growth stage of corn advance, the options for applying POST herbicides diminish.  In these situations, you may not have the ability to make ‘rescue’ applications, so make sure you chose a POST herbicide mixture and rate that is sufficient to control the weeds.  This warning is important this year because we have received complaints that “glyphosate doesn’t seem to be ‘working’ well” this year.  Some of this is likely due to the weeds being larger than normal.  However, we have also noticed this in a few of our research trials this year, and it’s not just glyphosate herbicide, but the issue is that many of the weeds may be ‘hardened off’ due to the hot and dry conditions we’ve been experiencing.  What I mean by ‘hardened off’ is a variety of plant changes including thicker cuticles making herbicide penetration more difficult, slower growth and respiration rates which may slow down translocation when herbicides do get into the plant, and potentially deeper roots and more advanced plant age(development) than the vegetative size (or shoot height) would indicate.  Moreover, in several cases many weeds are bigger than they appear because they were not completely controlled during preplant tillage, but rather, they were injured and bent over in the soil but were not killed. When they re-grow they often grow in a new direction with distorted root/shoot development where some of the initial stem remains underground.

In many of these cases where the strategy will be to use glyphosate in Roundup Ready hybrids, pay attention to both crop stage and weed heights.  In corn, the maximum glyphosate rate for single POST applications is 1.13 lb ae/acre, and there is a maximum of 2.26 lb ae/acre for the entire season.  That translates to 32 fl oz/acre of Roundup Weathermax, or 48 fl oz/acre when using many generic glyphosate formulations that have a concentration of 3 lb equivalent glyphosate acid per gallon.  Glyphosate applications can be made up to 8 developed collars (V8) or 30” corn, whichever occurs first.  For both increased efficacy, and for glyphosate resistance stewardship, many late POST applications in corn with large/difficult to control broadleaves like giant or common ragweed and lambsquarters would be well advised to tank-mix 2.5 fl oz/acre Status herbicide + 0.25% v/v nonionic surfactant and 5 lb/100 gallon spray grade ammonium sulfate.  In our plots where we’re investigating control options for giant ragweed, some of the plants where no preemergence herbicides were applied are already too big according to the Roundup label for the lower rates (less than 1.13 lb ae/acre) (Figure 1).

If you are struggling to control ragweeds or lambsquarters in your fields, here are some excellent resources that were assembled by a large group of weed scientist a couple of years ago in a series called “The Glyphosate, Weeds, and Crops Series”:

Additionally, I included an article to review ways to increase performance of glyphosate.  One important consideration this year, even though there is little suggestion or remedy, is to be concerned with excessive dust and the impact that may have on glyphosate efficacy this year. 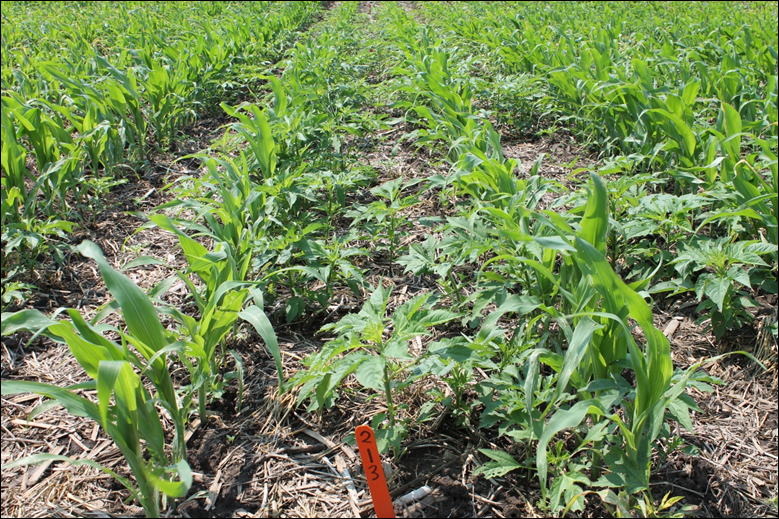 Figure 1. Giant ragweed in a picture taken on 6/11/12 in Sauk county, WI in a no-till corn field.  Corn was V6 and giant ragweed ranged from cotyledons (just emerging) to 14 inches in height.