Are Chances for Carry-Over Nitrogen Diminishing?

With last summer’s drought throughout much of the state, we headed into winter with variable and sometimes high (eg. 325 lb N/a) amounts of nitrate remaining in the soil profile. One of the key factors determining whether or not this excess N will be available for the 2013 crop is the amount of over-winter precipitation. When over winter precipitation is normal, the potential for N carry-over is low on sandy soils, medium on loams, and high on silt loams and silty clay loams. Precipitation throughout southern and central Wisconsin from October 1, 2012 through April 25, 2013 is greater than normal (Figures 1), which suggests that the potential for carry-over N may no longer be high on silt loam soils in southern and central Wisconsin. 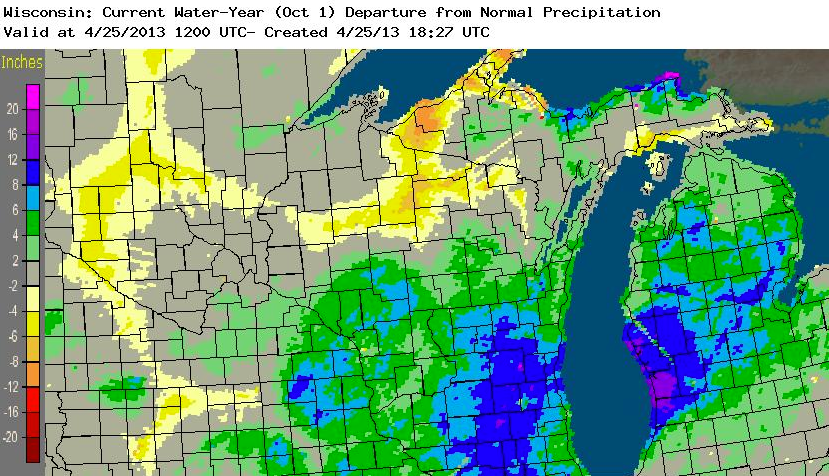 The soil nitrate monitoring network was set up to track fall and spring soil profile nitrate concentrations following the 2012 drought. With the recent wet weather, only a few samples have been collected this spring and that data is not yet available. Keep checking the website (http://uwlab.soils.wisc.edu/soilnitratemonitoring/) for new spring sampling data.

So what should a farmer or agronomist do? One thing that can be done is to keep checking the soil nitrate monitoring network website for data. A second thing that can be done is to take preplant nitrate samples in your fields. The preplant nitrate test (PPNT) requires sampling to two feet in one-foot increments. This will give the amount of nitrate in the soil profile to two feet. During development of the PPNT in the early to mid-1990s, an equation was developed to estimate the amount of nitrate found in the third foot of soil (24-36 inches) based on the amount found in the second foot (12-24 inches). This estimation is necessary because there is often nitrate in the third foot of soil, but no one is really interested in taking samples to three feet. The amount of nitrate measured in the first and second foot of soil is added to the amount estimated for the third foot to obtain the total lb N/a. Background nitrate in a PPNT is 50 lb N/a; therefore 50 lb N/a must be subtracted from the total (0-3 foot) amount to obtain a N credit in lb N/a.

The general guidance for taking soil samples for nitrate analysis is to take 15 soil cores randomly from 20 acres. In most years this sampling intensity would be appropriate. However, this year there may be quite a bit of variation in the amount of soil profile nitrate caused by the drought, but also caused by winter and early spring precipitation. Infiltration and percolation of this moisture was not even across fields. Infiltration and percolation will vary across the landscape because of changes in slope, topography, soil texture, frost, etc. Thus, we might expect that low areas of fields, where water may have been (or is) standing, could have lower nitrate concentrations because more water was (or will) move through the soil profile compared to areas of the field with slopes or knolls. When taking PPNT samples, consider a somewhat more intensive sampling scheme that includes separating sampling areas based on topography and memories of where corn yields may have been most impacted by drought in 2012. Use PPNT results to adjust 2013 N applications to improve profitability.

For more information on using the PPNT see Chapter 5 in UWEX Publication A2809 Nutrient application guidelines for field, vegetable, and fruit crops in Wisconsin.