Heavy rainfall causes loss of carry-over nitrogen on some fields

Last week I answered the question: “Are chances for carry-over N diminishing?” The short answer was maybe. Large amounts of precipitation from last fall to this spring provided the conditions necessary to have nitrate leaching, even on medium- and fine-textured soils. Last week only limited soil profile nitrate data was available to evaluate the situation. In the samples collected on two dates from different fields, it appeared that nitrate was moving down in the soil profile, but may not have moved out of the rootzone.

This week we received soil profile nitrate data from 17 locations representing 28% of the locations in the soil nitrate monitoring network that was established last fall to track the potential for carry-over nitrate from the 2012 drought. Table 1 provides data for these 17 locations. It can also be found at: http://uwlab.soils.wisc.edu/soilnitratemonitoring/. At all locations sampled to date, there is less nitrate in the soil profile now compared to last fall. Sites with lower amount of nitrate last fall lost relatively small amounts of nitrate through winter and spring. Nitrate loss was as high as 172 lb N/a at Waterloo (Pella silty clay loam, site 3). On a Plano silt loam at Arlington (site 1) only 36 lb N/a were lost from the top 3 feet of soil. However 138 lb N/a remain in the profile; which provides an 88 lb N/a credit to this year’s crop. Data from the Arlington site clearly show that nitrate has moved from the top foot and into the second foot of soil. Additional rainfall could still leach this nitrate out of the rootzone.

To obtain a N credit from carry-over N using a preplant nitrate test (PPNT), 50 lb N/a must be subtracted from the amount of N in the 3-foot soil profile. Most PPNT sampling is to 2 feet; so the amount of nitrate in the third foot is estimated at the lab. Table 1 shows the actual N credit based on sampling to 3 feet (not all locations were sampled this deep), as well as the N credit based on sampling to 2 feet and estimating the third foot. For samples taken this spring, estimating nitrate in the third foot tends to provide a 10 lb N/a larger N credit on average compared to when samples were taken to 3 feet.

Based on spring profile nitrate samples collected to date, N remaining in the soil last fall after corn harvest has moved through the soil profile. In some cases, all of this N has moved out of the rootzone. In other cases, there is still a substantial N credit from N remaining deeper in the soil profile. As more data is obtained, the soil nitrate monitoring network website will be updated. Consider taking PPNT samples to assess the potential for N credits from carry-over N that resulted from drought stressed corn in 2012. For guidance on taking PPNT samples after a drought, see last week’s article titled: “Are chances for carry-over N diminishing? ”. 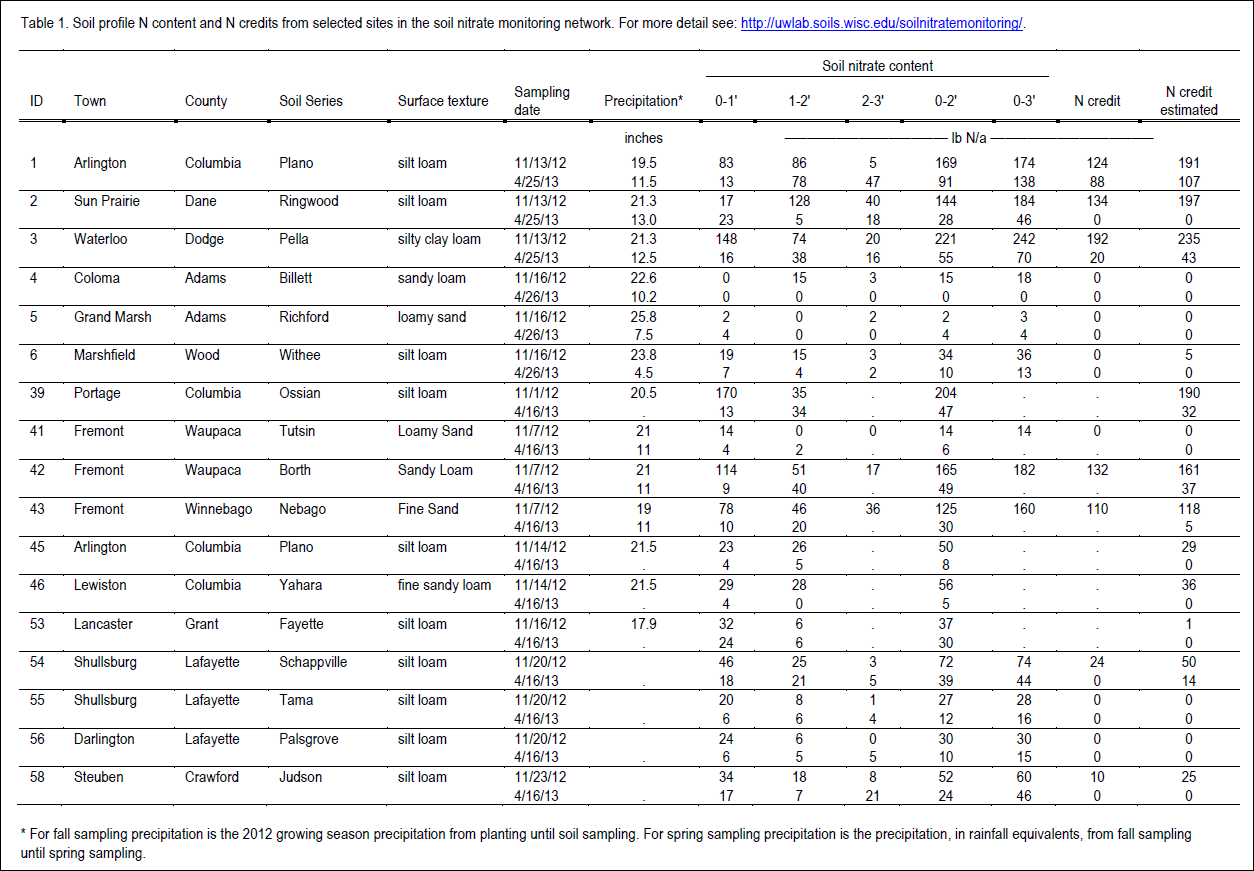