We have had a report of ergot in pastures.  This is not unexpected with the cool, wet spring we had.  This can be toxic to cattle, sheep, and horses.  Read the attached and alert animal owners with pasture to be watchful.

Ergot is a fungal disease of worldwide distribution that is common in the northern two-thirds of North America. Ergot affects wild and cultivated grasses, as well as small grain crops such as wheat, oats, barley and especially rye. The ergot pathogen produces alkaloid toxins that are mostly vasoconstrictors. This means that the compounds produced as a result of ergot reduce blood flow in mammals. If these alkaloids are ingested they can result in convulsions, hallucinations, gangrene, and death. The effect of ergot is cumulative; poisoning may develop slowly if lesser quantities are eaten regularly. In animals such as cattle the first symptom of alkaloid toxicity is lameness, 2 to 4 weeks after exposure, as a result of the reduced blood flow to the extremities. The reduced blood flow will eventually lead to complete blockage of blood vessels with terminal necrosis of the
extremities such as hooves and ears. This can be exaggerated in very hot or cold conditions.

Signs of ergot first appear as droplets of a sticky exudate (called honeydew) on immature grain heads. Honeydew contains asexual spores of the ergot fungus. Over 40 species of insects are attracted to honeydew and can carry spores from infected to healthy plants. After approximately two weeks, infected grains are replaced by dark, compact fungal structures (called sclerotia). Sclerotia range in size from 1/16 to 3/4 inches in
length, and often look like seeds, rodent droppings, or insect parts. 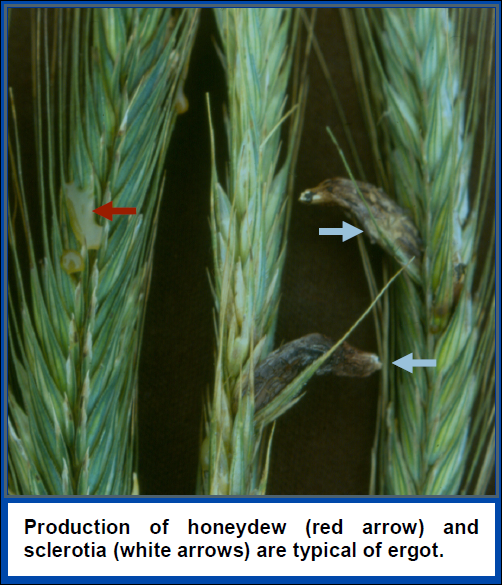 Ergot is caused by several species of the fungus Claviceps, most commonly Claviceps purpurea. Sclerotia of these fungi survive in soil and harvested grain. Sclerotia require a one to two month period of cold temperatures (32 to 50°F) after which they germinate to form small, mushroom-like structures that produce sexual spores. Germination is most common in cool (57 to 84°F), damp weather and is inhibited at higher temperatures. Sexual spores are blown to developing grain heads where infection occurs. Humid weather (> 90% relative humidity) contributes to honeydew production. Ergot is also often more severe if frosts occur at the time of spore production.

Fungicide treatments are not recommended to control ergot. If ergot occurs, modern cleaning equipment may assist in removing sclerotia from grain. However, if sclerotia are broken or are the same size as the grain itself, removal might be difficult and costly. Often attempted removal of sclerotia from grain will still result in levels above marketable thresholds. Tolerances for ergot sclerotia in harvested grain can be as low as 0.05% by weight. Infected grass crops should not be harvested for animal feed or grazed. All hay should be destroyed and should not be used for animal bedding.

Management of ergot should include rotation with at least one year between small grain crops. Use crops that are not susceptible to ergot (e.g., soybeans, alfalfa, corn) in years when small grains are not grown. Plant seed that is free of ergot sclerotia. Ergot resistant varieties are not available, but avoid longer-flowering varieties as they tend to be more susceptible to infection. Keep weed grasses under control. Also, mow areas adjacent to small grain fields to prevent grasses from flowering and prevent development of ergot in these areas. In fields where ergot becomes a problem, consider clean, deep plowing that will bury ergot sclerotia to at least three to four inches, thus preventing sclerotia from germinating.