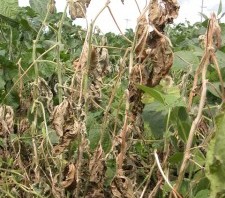 Several diseases have been popping up in soybean fields around the state over the past couple of weeks.  White mold (a.k.a. Sclerotinia stem rot) has become apparent in various fields, along with the appearance of Sudden death syndrome, and Phytophthora root and stem rot of soybean.

Now that symptoms of white mold are readily apparent in many fields, questions have been flooding in about scouting and spraying a fungicide.  Scouting at this point only helps the grower/consultant make a record of where white mold is found, so that good management decisions can be made it that field the next time a soybean crop is planted there.  At R4 and later growth stages it is too late to spray for white mold.

Recent research published among the North Central Region soybean pathologists show that the best time to apply a fungicide is at R1 followed by the next best timing being at R3.  After R3 success declines rapidly.  Remember too that the “curative” ability of fungicides is very misleading.  No fungicide will “cure” any infection.  Many of these simply inhibit spore germination or disrupt mycelial development and don’t kill the fungus.  Also, now that soybean canopies are very thick it is very hard to get the fungicide down under the canopy in contact with the fungus.  All fungicides labeled for soybean are contact fungicides (no movement into plant), local penetrants (limited movement into the plant), or acropetal penentrants that move only upward in the plant.  Therefore, the expectation of applying a fungicide to the upper foliage and it moving down to the crown of the plant is unreasonable.  Earlier this season I published an disease profile on white mold (pdf).  View the profile to find a summary of  control recommendations along with other helpful informational links.  You can learn more about fungicides, fungicide mobility, and fungicide mode of action by visiting the Field Crop Fungicide  page.

Interveinal necrosis and chlorosis of foliage are typical of sudden death syndrome, and look similar to foliar symptoms of brown stem rot.

Actually it isn’t as sudden as the name sounds.  Sudden death syndrome (SDS) is actually a slow death, if death actually occurs.  SDS is caused by the fungus Fusarium virguliforme.  This fungus infects soybean roots very early in the growing season and causes a root rot.  It also produces a toxin that is translocated up the vascular system of the plant, which causes the characteristic interveinal (between veins) yellowing and browning of leaves.  This symptom looks very similar to Brown stem rot (BSR); so foliar symptoms alone can’t be used to distinguish SDS from BSR.  Plants should be pulled and the roots and internal stem should be inspected.  Rotted root systems with NO BROWNING OF THE PITH indicate SDS.  Intact roots systems WITH BROWNING OF THE PITH indicate BSR.  Under extreme cases of SDS leaves can curl and plants can wilt and die.  Conditions that favor SDS include high yield environments and cool wet growing seasons, like we have had this season.

Management for SDS is purely preventative.  Resistant or moderately resistant varieties should be planted in fields with a history of SDS.  Also, delaying planting a bit might also help reduce the severity of SDS.  No fungicide will be effective against SDS and spraying a fungicide is not recommended.  Scouting is encouraged to make record of where SDS was found in order to make SDS-management decisions for future soybean crops.

Brown discoloration of a soybean stem as a result of infection by Phytophthora sojae. Photo Credit: Craig Grau.

Phytophthora Root and Stem Rot…Now That is a Funny Name

While it can be a tongue twister to say, it can be a problem in soybean fields in Wisconsin.  Some fields have been identified this season with Phytophthora root and stem rot caused by Phytophthora sojae along with several fields where root rot was observed on plants as a result of infection by a newly described Phytophthora species, Phytophthora sansomeana (see an earlier article about P. sansomeana).  The Wisconsin Department of Agriculture, Trade and Consumer Protection, Plant Industry Bureau Laboratory recently completed a survey of 52 soybean fields around the state.  In that survey P. sojae was identified in 7 fields, while 5 fields were identified with P. sansomeana.  No Phytophthora was detected in the other 40 fields (See Map).

Phytophthora root and stem rot is favored by saturated soil and cool to moderate temperatures (58 F – 77 F).  Fields that are not well drained are more prone to the disease.  Management is purely preventative by choosing varieties with resistance to P. sojae.  There are several races of P. sojae so it is important to choose a variety that has resistance to the primary races in Wisconsin.  Varieties with the RPS 1K form of resistance work well in many fields in Wisconsin.  No foliar fungicides are effective against Phytophthora root and stem rot.  However, fungicide seed treatments can help reduce infection early in the season.  Also improving water drainage can help reduce damage by Phytophthora species.