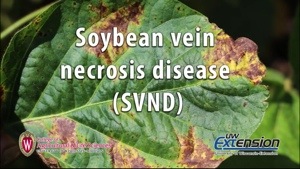 In 2012 soybean vein necrosis disease (SVND) was described for the first time in Wisconsin (http://fyi.uwex.edu/fieldcroppathology/files/2012/10/SVNaV.pdf).  This is a relatively new disease of soybean, which is caused by Soybean vein necrosis virus (SVNV). SVNV was first described in 2008 in the Mid-south soybean production region.  Since then, SVND has been found in much of the major soybean production region of the U.S. including the North Central region.

SVNV is a Tospovirus similar to Tomato spotted wilt virus.  It is the first Tospovirus known to infect soybean.  Tospoviruses are known to be very destructive on other plant crops, therefore, there is a lot of interest in determining the importance of SVNV in soybean production systems.  Very little is actually understood about the epidemiology and also the management of SVND.  Researchers around the country are working on various aspects of the system and several state and regional soybean commodity boards have funded research on SVND.

Recently Zhou and Tzanetakis (2013) described some of the first studies on the epidemiology of SVNV.  Their findings suggest that SVNV is like other Tospoviruses in that it is primarily transmitted by thrips vectors.  Soybean thrips are a commonly occurring insect in the Mid-south and were used in their studies to demonstrate that the virus can be transmitted via thrips vectors.  In Wisconsin, soybean thrips are not as common.  However, other species of thrips can be found in soybean fields depending on the time of the season.  Through funding granted by the Wisconsin Soybean Marketing board, our laboratory is currently monitoring thrips populations in soybean fields around the state.  We are evaluating thrips species and populations over time through trapping methods.  We are also surveying these fields for SVND severity and documenting any variety resistance in soybean cultivars commonly grown in Wisconsin.  Finally, we have separate trials were we are evaluating yield loss due to SVNV. Our research will complement research in other states and the results will be used to develop and disseminate management recommendations for SVND in the North Central Region over the next several years.

To learn more about SVNV download a new UWEX fact sheet at http://fyi.uwex.edu/fieldcroppathology/files/2013/04/Soybean-Vein-Necrosis-Disease.pdf.

A new video was recently developed on SVNV in Wisconsin.  Dr. Damon Smith talks about SVND, which includes tips on spotting symptoms of SVND and information about the likely vectors of the pathogen.  The video can be found at the top of this article.