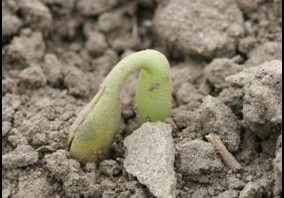 Earlier soybean planting coupled with increasing seed costs and higher commodity prices have led to a surge in the number of acres planted with seed treatments (Esker and Conley, 2012). Furthermore, the components and relative cost of various soybean seed treatments has broadened greatly. Recent studies have suggested that growers should consider lowering seeding rates to increase their return on investment (De Bruin and Pedersen, 2008; Epler and Staggenborg, 2008). This recommendation is attributed to the soybean plant’s potential compensatory ability at lower plant populations. Ultimately, growers would like to know the value proposition of combining seed treatments with lowered seeding rates. Therefore, the objectives of this study were to:

•Quantify the effects of seed treatments and seeding rates on soybean yield.

ApronMaxx RFC and CruiserMaxx (Syngenta Crop Protection) seed treatments were used to achieve these objectives because they differ in their components and relative cost per unit. This study was conducted in 2012 and 2013 at nine Wisconsin locations. All locations were planted in 15 inch rows within the first 3 weeks of May.

To read the full PDF version of this article follow the link below: