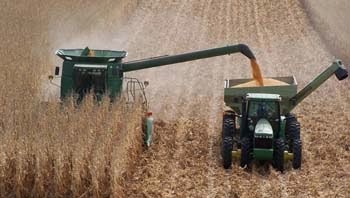 The drastic outdoor cooling that has occurred may create some grain storage and drying problems. Following are some questions that I have received and my responses. The questions are italicized and my answers follow the questions.

“With the sudden change in air temps. What is the best management strategy for running aeration fans on bins to cool grain without freezing the bin?”

The kernels will not freeze together if the corn moisture content is below 24%. There is extensive experience with cooling corn to well below freezing and the corn still being able to flow normally. The acceptable moisture content decreases with more foreign material in the corn. I recommend that corn moisture be less than 24% to hold it until outdoor temperatures are above freezing and at or below 21% to hold corn until spring.

Some people are recommending that wet corn be not be cooled below freezing because ice crystals will form in the void spaces between the corn with the moisture coming from the corn. I am not aware of this being a problem again based on extensive experience.

Frosting will occur when moist air comes in contact with a surface at a temperature below freezing. It typically occurs when air from warm corn comes in contact with a cold bin roof and roof vent during aeration. It can occur with corn at temperatures below freezing when warmer air comes through the cold corn. This could occur if the corn at the top of the bin was cold and warm air from corn below is moved through the cold corn as the bin is cooled using aeration. Normally this will occur only in a shallow layer of corn at the top of the bin and only for a period of time until that corn has been warmed by the warm aeration air coming from the warm corn. The amount of frost accumulation expected in the corn increases as the corn gets colder and layer of corn gets thicker. Since corn is a good insulator, the cold layer is normally expected to be fairly thin and the warm aeration air removes the frost.

If the corn is warmer than the bin steel, condensation in the form of frost will occur on the bin roof and bin vents. The rapid drop in outdoor temperature makes this very likely. Cooling the corn in small steps reduces this potential. The general goal is to cool the corn to just below freezing, so operate the fans only when outdoor air temperature is above 20 degrees. Corn at 22 percent moisture has an estimated allowable storage life of about 60 days at 40 degrees and 30 days at 50 degrees. Cool corn at recommended moisture contents can wait for cooling until appropriate temperatures exist. Ideally the aeration air temperature would be 10 to 15 degrees cooler than the corn. If it is extremely cold, it is best to not run the fan and wait for an appropriate air temperature.

“Should I place cold grain on warm grain?”

This will increase the potential for condensation and frosting in the cold grain. The grain in the bin should be cooled before cold grain is placed on top. Review the explanation of the conditions that may lead to frosting within the corn. Placing cold grain on top of warm grain creates the conditions expected to cause frosting problems. The amount of frost may be enough to restrict or block airflow. The frozen mass would greater increase the force required to break the ice, so normal stirring devices likely would not be adequate. It may require using an ice auger or other method of breaking the corn apart to permit airflow and unloading.

Corn harvested at temperatures below freezing can be placed into storage, but should not be placed on top of warmer corn. The maximum recommended moisture content is about 23 percent to reduce the potential for kernels freezing together. If corn at 25% moisture is placed into a bin with kernel temperatures below freezing, it should flow out of the bin as long as the kernels do not warm above freezing. At 25% moisture there may be enough surface moisture to cause the kernels to stick (freeze) together if they are cooled below freezing.

“How should I manage the following three scenarios:

1) Grain harvested at 15% moisture with air temps at 60 to 70 degrees F, filled bin day before cold air moved in, when is the best time to run fan and how long can I wait to start cooling bin?”

“2) Two grain bins, 10,000 bu and 15,000 bu, both filled 1/2 to 2/3 full with corn harvested with warm temps. Ran fans continuously while harvesting. Turned fans off when temps dropped below freezing. Have finished filling both bins with corn harvested during cold snap. I have two temp zones. What is the best time for running fans to balance temp without creating condensation problems? Corn moisture is 16.5% or less.”

The corn in the bottom is warm and at the top is cold. This has been described earlier as a situation that can cause condensation and frosting within the cold corn. The condensation will continue until the warm grain on the bottom has been cooled. In the laboratory the amount of condensation and frost build-up was minimal when warm (70 degree) humid air was used to aerate grain at a temperature of 10 degrees. No visible frost was observed and the wheat moisture content increase was only about 0.5%. This experiment is being repeated with corn. I have heard of frost accumulating in the corn near the top of the bin when running the fan when it is moving very cold air through the corn. Condensation and/or frosting are expected in the corn if cooling warm corn with air that is colder than 32 degrees. It is not clear if this will cause problems. It is preferred to cool the corn in steps with air above freezing for the first cycle, if possible, and to monitor the condition of the corn.

“3) Began filling last bin with cold corn harvested during this cold spell. Do I need to run the fan much if at all since this corn is going into bin when harvested at air temps below freezing?”

“I have a question from a farmer who filled his bin half full of corn at 24% moisture about 2 weeks ago. It is only a natural air dryer, so this is too wet for the bin. He was running the fans, but shut them down in this cold weather. He is looking for some advice. He has had this bin for 35 years, but the wet and very cold temps add a new challenge.”

“He still has 50 acres to combine, and wants some advice. His thoughts

There is additional information in a presentation on my website: http://www.ag.ndsu.edu/graindrying/presentations-2