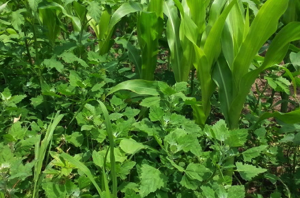 In the June 13th issue of the Wisconsin Crop Manager, I discussed herbicide resistance management for giant and common ragweed, http://wcws.cals.wisc.edu/herbicide-resistance-management-for-giant-and-common-ragweed/ . This week’s featured herbicide resistance threats are common lambsquarters, Chenopodium album, and horseweed, Conyza canadensis. Weed scientists across the Midwest and Midsouth have identified eleven species of weeds that are of most concern for herbicide resistance because of their ability to compete with crops and to develop resistance to different herbicide sites of action. In 1979, University of Wisconsin weed scientists identified a population of common lambsquarters resistant to atrazine, a photosystem II inhibitor (www.weedscience.org). Lambsquarters populations in Michigan and Ohio have been found resistant to ALS inhibitors. In 2013, University of Wisconsin researchers identified horseweed plants resistant to glyphosate, http://wcws.cals.wisc.edu/late-season-weed-escape-survey-in-wisconsin-identifies-a-second-county-with-a-glyphosate-resistant-horseweed-population/ . Ohio and Delaware have horseweed populations resistant to both ALS inhibitors and glyphosate. Resistance to a single site of action has occurred in over twenty states.

Now is the time to start thinking about fall horseweed management. Emergence typically occurs in the early spring and again in the fall. Long-term no-till systems tend to harbor significant horseweed populations. Scouting in mid to late summer to locate any escapes from spring herbicide applications is important for herbicide resistance management and to decide whether to switch to a horseweed management program that includes both spring and fall control measures. Fall herbicide applications can help to reduce horseweed populations in problem fields. Also, if dandelion is an issue, then there are two reasons to consider fall herbicide applications. University of Wisconsin researchers found that fall dandelion control is best prior to next year’s corn crop. Their results are available as a slide presentation at http://www.slideshare.net/weedscience/ag-lime . Kevin Bradley at the University of Missouri has a video, less than five minutes, discussing the importance of application timing for horseweed control, https://youtu.be/mbs9cJKMCsk . Ohio State and Purdue University have a great fact sheet on horseweed management at https://ag.purdue.edu/btny/weedscience/Documents/marestail%20fact%202014%20latest.pdf . Also, the TakeAction website has a fact sheet with spring and fall herbicide recommendations at http://takeactiononweeds.com/wp-content/uploads/sites/54/2014/06/management-of-herbicide-resistant-horseweed-marestail-in-no-till-soybeans.pdf

Common lambsquarters can be difficult to manage because of an early and sustained emergence period, long seed persistence, and competitive ability. A 50 percent reduction of seed in the soil seedbank requires about 12 years and 78 years for a 99 percent reduction. Management goals should include: starting with a clean field, using a pre-emergence residual herbicide, scouting, and applying a post-emergence herbicide if necessary. For specific management recommendations, please consult the TakeAction fact sheet at http://takeactiononweeds.com/wp-content/uploads/sites/54/2014/06/common-lambsquarters-management-in-soybeans.pdf

Common lambsquarters located in a non-treated plot at the Rock County Farm in Janesville, WI on June 24, 2015. The corn was planted on May 13.