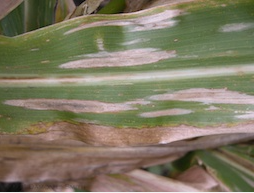 The 2014 field season was a bit of a challenge for corn growers in Wisconsin, to say the least. We had poor growing conditions, which made for a lot of challenges including diseases. On the top of that list in Wisconsin was Northern Corn Leaf blight (NCLB). A close second was Goss’s Wilt.  Already in 2015, states like Iowa and Nebraska have already reported both diseases on corn. This is among the earliest reports of both diseases in many years. In Wisconsin, we haven’t seen either of these yet, but given the weather patterns recently, I think it is only a matter of time.

For many folks, identification of these two diseases can be challenging. Many are confused by the subtleties of each disease “signature.” Diagnosis is critical in making your management decisions properly. Obviously, the best way to properly diagnose any plant disease problem is to send a sample to the Plant Disease Diagnostic Clinic. A sample can be sent by following their helpful sample guidelines, which can be found by clicking here. In addition to sending a diagnostic sample, there are some signs and symptoms that can be identified in the field, to help get you closer to diagnosing the right disease. Here are some helpful details for each disease.

Northern Corn Leaf Blight (NCLB): NCLB is caused by a fungus called Exserohilum turcicum. The most diagnostic symptom of NCLB is the long, slender, cigar-shaped, gray-green to tan lesions that develop on leaves (Fig. 1).  Disease often begins on the lower leaves and works it way to the top leaves.  This disease is favored by cool, wet, rainy weather, which has seemed to dominate lately. Higher levels of disease might be expected in fields with a previous history of NCLB and/or fields that have been in continuous and no-till corn production. The pathogen over-winters in corn residue, therefore, the more residue on the soil surface the higher the risk for NCLB.  Management should focus on using resistant hybrids and residue management.  In-season management is available in the form of several fungicides that are labeled for NCLB. However, these fungicides should be applied at the early onset of the disease and only if the epidemic is expected to get worse. Often the best time to apply fungicides to field corn to maximize the benefits is near the VT/R1 growth stage. However, if NCLB is visible on leaves earlier than this time, a fungicide might be beneficial at those earlier stages. The only way to determine this is to scout frequently and keep an eye on the disease situation in your corn crop.

If you elect to control NCLB with fungicides, you might consider taking a look at my page on FUNGICIDE INFORMATION. This page talks about fungicide use in general and also includes the 2015 Corn Fungicide Efficacy Table. You will find products listed with good efficacy toward NCLB on this table.

Goss’s Wilt: Goss’s wilt is caused by the bacterium Clavibacter michiganensis subsp. nebraskensis. First visual symptoms usually appear as gray or yellow stripes on leaves that tend to follow the leaf veins (Fig. 2). Often “freckles”, or brown or green irregular spots, can be observed within the leaf lesions (Fig. 3). Freckles are an excellent diagnostic symptom to confirm Goss’s wilt. Vascular tissue, husks, and kernels can sometimes take on an orange hue. Occasionally, bacterial ooze or dried ooze can be observed on symptomatic leaves. Fungicides do not work for Goss’s wilt, because this is caused by a bacterium, not a fungus. Management is preventative for Goss’s wilt. Choose hybrids with the best possible resistance, manage excessive amounts of corn surface residue, and rotate crops. The longer the rotation between corn crops, the better. There are some foliar products being marketed for the control of Goss’s wilt, but no efficacy data are currently available.

Corn Diagnostics Quick Guide: Many of you likely attended the 2014 Pest Management Update Series and obtained the corn diagnostics quick guide sheet to help differentiate between Goss’s wilt and NCLB. I have again attached it to this post for download as a PDF. This is a quick guide to help you differentiate the diseases in the field. Remember, the only way to definitively differentiate the diseases is to send a sample to the diagnostic clinic. Get out there and SCOUT, SCOUT, SCOUT!