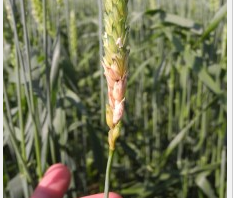 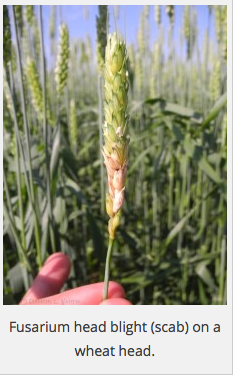 As we head into the 2015/16 Wisconsin winter wheat field season, I have received a lot of questions on Fusarium head blight (scab) management due to the heavy pressure from that disease in the 2014 and 2015 wheat crops. Along with those questions, always come inquiries about fungicide programs, specifically fungicide timing and fungicide products effective for controlling the disease. We have already addressed timing of application in this article: Start Managing for Fusarium Head Blight Now Before You Plant the 2015/16 Crop. But what about efficacy of products and fungicide programs? Previous results from 2013 and 2014 Wisconsin Winter Wheat Fungicide evaluations can be found by CLICKING HERE. In addition, you will find the 2015 fungicide evaluation results below.

The 2015 trial was established at the Arlington Agricultural Research Station located in Arlington, WI. The soft red winter wheat cultivar ‘Kaskaskia’ was chosen for this study. Wheat was planted on 24 Sep 2014. Treatments consisted of a non-treated control and 9 fungicide treatments. All fungicide treatments contained the non-ionic surfactant Induce 90% SL at 0.125% v/v. Fungicides were applied using a CO2 pressurized backpack sprayer calibrated to deliver 20 GPA. Fungicides were used to target general wheat disease in the area. Fungicides were applied either just before jointing (Feekes 5), at emerging flag leaf (Feekes 8), at anthesis (Feekes 10.5.1), or using two sprays with the first occurring just prior to jointing (8 May) or at emerging flag leaf (21 May) and the second spray being applied at anthesis (3 Jun). Natural sources of pathogen inoculum were relied upon for disease and plots were also inoculated with Fusarium graminearum (the head blight pathogen). Fusarium head blight was the primary disease in the trial and was evaluated by estimating average incidence in each plot. Level of deoxynivalenol (DON) will also be evaluated but results are not yet in.