The best way to approach the decision to determine the “correct” plant density for a field is to find the plant density where the maximum yield (MYPD) occurs. Figure 1 shows 10-yrs of data from Arlington experiments that tested corn grain and silage response to harvested plant density. In this example, the grain MYPD occurs at about 39K. The economic optimum (EOPD) is about 4K to 5K less than the MYPD. However, you can be within 95% of MY at about 29K indicating how “broad shouldered” the plant density response is (a 10K swing = $37.50/A at $300/80K bag). When the cost of production and ultimate economics are not favorable like this year, you may want to think hard about going after MY, but make sure you are above 29K.

On the silage side it is more difficult to find the EOPD. I have always approached the silage EOPD from the Milk per Acre measure, but that does not take into account seed costs. So in the attached example, Milk per Acre is maximized at 45K. I would think that you need to subtract 4K to 5K to get at the silage EOPD. It will fluctuate widely with milk price and given the outlook for this year you may want to lower the plant density 8K to 10K. Again you are still within 95% of maximum Milk per Acre above 29K. 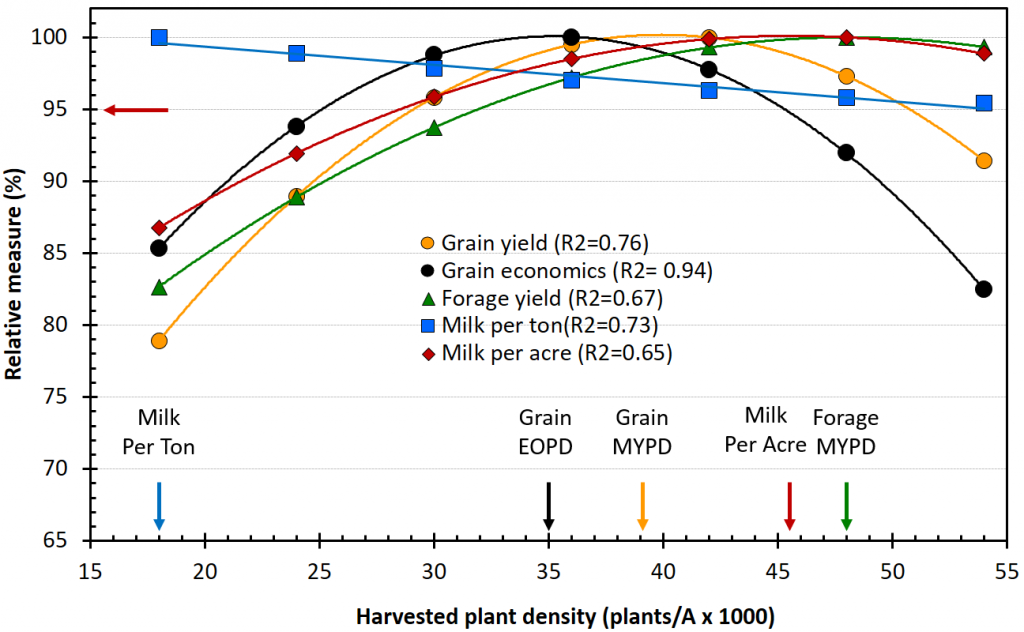 Figure 1. Relationship between corn plant density and grain yield, economic optimum, forage yield, Milk/Ton, and Milk/Acre. Data are derived from Arlington during 2005 to 2014.

Every hybrid and every field likely has different MYPD and EOPD values. Breeders are constantly improving standability of corn hybrids, so the MYPD has been increasing every year by about 400 plants/A. In addition, environment and management style will influence these values (i.e. drought versus a normal year). This relationship indicates the ability of the corn plant to compensate for discrepancies in plant density, but it is highly influenced by grain/silage/milk prices and input costs. It also says a few things about the implications of variable rate seeding.