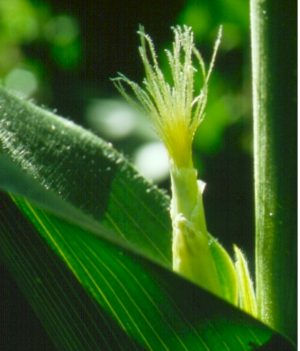 The corn plant during July transitions from developing vegetative structures to reproductive structures. It is significant for yield in that two of the three components of yield are set up during this month. In the first half of the month, the number of potential ovules that could develop into kernels is determined. In the second half, the number of potential cells in the kernel endosperm, which ultimately affects kernel weight, is determined. However, everything is predicated on the success of pollination and fertilization of the ovules on the topmost ear from pollen released by the tassel (see “Methods for determining corn pollination success“).

During early July ear development is rapid and prior to tasseling (V18). The upper ear shoot is developing faster than other shoots on the stalk. Brace roots are now growing from nodes above the soil surface. They will scavenge the upper soil layers for water and nutrients during reproductive stages. Moisture deficiency will cause lag between pollen shed and beginning silk (“nick”). Usually the largest yield reductions will result from this stress. The plant is using 0.30 inches of water per day. Lodging will cause 12-31% yield reduction. Frost (<28 F) will cause 100% yield loss due to plant death (see “Frost“). Hail will cause 100% yield loss when completely defoliated (see “Hail damage on corn“). Drought will cause 4% yield loss per day due to drought or heat when leaf rolling occurs by mid-morning (see “Drought“). Flooding (<48 h) will not affect yield, however, other management options need to be considered (see “Flooding effects on corn“).

At the silking (R1) stage the actual kernel number and potential kernel size is determined. R1 begins when any silks are visible outside the husks. Pollen shed begins and lasts 5-8 days per individual plant. Silk emergence takes 5 days. Silks elongate from base of ear to tip of ear. Silks elongate until pollinated. Silks outside husks turn brown. The plant has now reached its maximum height. First 7-10 days after fertilization cell division occurs within kernel after which kernels begin to fill with starch.

The plant must have a healthy root system because proper uptake of moisture and nutrients are critical at this time. Hot and dry weather results in poor pollination and seed set. Drought dehydrates silks (delaying silking) and hastens pollen shed causing plants to miss window nick for pollination. Drought decreases yield 7% per day (leaf rolling by mid-morning). Rootworm beetle clips silks which prevents pollination if less than a half-inch of silk is showing

Nitrogen applied through irrigation water, should be applied by V18. Rootworm beetle control should be implemented if 4-5 beetles are observed feeding near ear tip. Stresses that reduce pollination result in a “nubbin” (an ear with a barren tip).