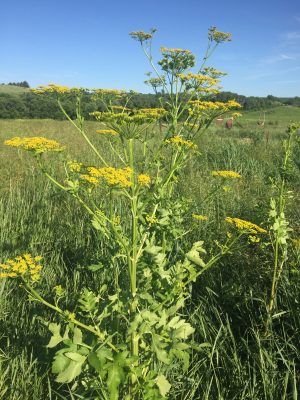 Wild parsnip (Pastinaca sativa), a non-native plant, was first discovered in Wisconsin before 1900. Even those this plant has been present for over 100 years populations continue to spread into unmanaged areas throughout Wisconsin. While this plant causes a range of impacts to the environment, the largest concern from this invading species is its ability to inflict burns to skin of people that come into contact with the sap from the plant. This reaction is called phytophotodermatitis as the sap will burn the skin when exposed to sunlight. Given the distribution of this species throughout the state (see map below) it’s impact on the human health of citizens of Wisconsin is likely large.

While this plant can invade a wide range of habitats, it is most commonly found in grassland areas near or alongside roadsides. In these habitats this plant is well adapted and can easily flower and produce viable seed that can be transported to nearby areas. Spread has been amplified by plants proximity to roadsides as they are often mowed after viable seed are produced and move seed long-distances. This and other factors have likely allowed for the enhanced spread of this plant.

This plant is regulated in Wisconsin by DNR invasive species rule (NR-40) as a restricted species. Due to this designation it is required that plants and reproductive propagules cannot knowingly be spread into un-infested areas. Fortunately this plant is easy to manage with a range of tools. Implementation of the appropriate management practice at the correct timing is critical. Below I summarize common control techniques available and how they can be fit into a management plan. Information is a combination of personal research, research from others and personal accounts from land managers. A detailed factsheet is available that summarizes these control efforts.

Removal: Pulling or cutting the root from the stem is an effective individual plant control technique but is best utilized when infestations are small and isolated. Plants can be pulled if soil conditions allow for the removal of the taproot, but the best success has been observed when cutting the taproot with a sharp shovel 1–2” below the soil surface. If the entire taproot is severed it will not re-root and produce viable seeds. If seed is present make sure to properly dispose of so they do not spread into un-infested areas.

Mowing can be effective if timed after the emergence of flower heads, but before seeds enlarge. The optimum timing in Wisconsin is when the secondary inflorescences begin to flower. This has traditionally been around the first of July in southern Wisconsin. If using this methods plants will resprout and likely flower. In Wisconsin’s climate these resprouting plants rarely produce viable seeds IF mowed at the correct stage and the growing season is not atypically long. Mowing prior to flowering (June) will likely result in viable seed being produced if populations are not mowed when resprouts are flowering. When implementing mowing as a control method, results have been very successful if implemented at the correct stage for three consecutive years. This strategy’s effectiveness is based on the short lived seeds in the soil, therefore annual management is required for multiple years to eliminate seeds from the seedbank. Often this technique when initiated in the first year will result in an increase in the number of plants, with a reduction in populations not seen until the third year. Care must be taken not to mow when mature seeds are present as this will spread the seed.

While this strategy is effective and efficient it can be challenging to implement across large areas when equipment availability is limited as the window for mowing can be as narrow as a two to three week timeframe some years. Limited success is also observed if plants are unmanaged nearby and produce viable seed that can land in the mowed areas. This is typical of roadsides where areas nearest the road are only managed.

Grazing/Biological Control: Wild parsnip is readily grazed by a variety of animals. While effective in suppressing aboveground growth, if parsnip constitutes too great a percentage of animals’ diets they can also develop toxicity to the plant. Light skinned livestock are particularly sensitive to wild parsnip, while dark skinned animals can tolerate ingesting this plant. If grazing animals on parsnip, ensure that other forages are included in sufficient amounts to prevent injury. While no studies have been conducted on long-term effectiveness of grazing, it is expected that 3-5 years of grazing at an intensity that would prevent seed production would be required to substantially reduce populations.

Several insects including the parsnip webworm can also feed and induce substantial injury to wild parsnip. While these can result in near complete defoliation of individual plants and prevent seed production, effectiveness of insects in reducing large populations has not been observed.

Prescribed Fire: Spring burns can kill germinating seedlings and can suppress above-ground growth of established plants depending on fire intensity. While seedlings are often killed as a result of fire many rosette plants will resprout and flower if not managed. This management method is not recommended unless integrated with other techniques such as mowing or herbicides.

Herbicides: A range of herbicides are effective at controlling wild parsnip. While research has shown that these products can control wild parsnip at any stage of development, the best results with the lowest rates applied have been obtained in the fall (September – October) to rosettes. Applications of herbicides that include metsulfuron, 2,4-D, or dicamba have provided greater than 90% reduction in flowering plants the following year. Unfortunately seedling germination the following spring is not reduced from herbicides with extended residual activity, therefore application would need to be applied the following year to prevent seed productions for two consecutive years. Spring applications to rosettes (April-May) can alleviate this issue if timed after seedling emergence as they will control seedlings and rosettes. This can result in two years of prevention of seed production with one application. Applications to plants that are about to or are flowering (June) can be effective, but higher rates of herbicides are required to prevent seed production. Applications when seeds are present on the plant (late July –August) ARE NOT RECOMMENDED as plants are beginning to senesce and viable seed has already been produced by the plants.

It is important to remember that these active ingredients mentioned can impact other broadleaf species, but are safe to most established grasses. If concerned about off-target damage to nearby desirable broadleaf plants spot or individual spot treatments are recommended. Non selective herbicides that contain glyphosate, while effective, are not recommended in grasslands as they will also injure desirable grasses and lead to reinvasion from parsnip or other unwanted species.

Selection of the appropriate herbicide for a site is critical to be in compliance with the label and minimize non-target damage. As many of these infestations are on/near roadsides, drift of herbicides should be considered. Often sensitive crops are grown adjacent to these locations that could be injured if the herbicides drift off-target. While drift can occur any time of the year, spring and summer applications are of the greatest concern. Fall applications after crops have senesced or been harvested can alleviate some of the risk, but depending on the product and rate applied enough residual activity may persist and cause injury the following spring.

Developing a management plan: While these management tools can be effective, the best results occur when individuals develop a multi-year management plan for infestations as one year of control with any technique rarely eradicates populations. These plans should include mapping, identification and implementation of acceptable control practices that fit the location, and monitoring of success of control methods applied. As some populations are too large for treatment in one year, this also allows for the development of a strategic plan that works from the leading edges of the infestation inward to over multiple years to efficiently reduce the population. For further information on how to identify and manage wild parsnip please visit http://fyi.uwex.edu/weedsci/ and enter wild parsnip in the search box.