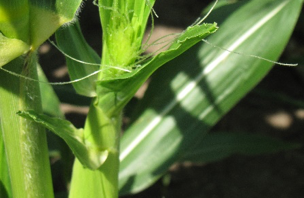 They’re back. Anyone surprised?

Adult Japanese beetles are starting to emerge, however, we don’t expect peak emergence for a few more weeks. What will happen in 2018 is anyone’s guess. Last year was one of the heaviest years in terms of adult numbers (not necessarily economic damage). Winter temperatures were moderate and soil moisture has been adequate. Both factors contribute to higher survival.

Adults are showy. About ½ inch-long, metallic green body, bronze-colored wing covers and they have six white tufts of hair on each side of the abdomen. Furthermore, they tend to feed in large groups and their damage on soybean is conspicuous in the upper canopy. Fortunately, the threshold for defoliation on soybean is relatively high. Don’t consider treatment until there is 30% feeding on vegetative soybean or 20% defoliation in reproductive stage soybean. Percent defoliation needs to be assessed on a whole plant basis. People tend to overestimate damage because they focus on the upper leaves not the whole plant.

During the summer months there are several insect defoliators that can be found in soybean. Japanese beetle feeding is relatively easy to distinguish from the rest. Many people describe their feeding as “net-like”. That is leaving the smaller leaf veins intact when compared to feeding from thistle caterpillars, clover worms, bean leaf beetles, grasshoppers and others. Recognizing Japanese beetle feeding may not seem important but adults easily move around from one food source to another and can abruptly leave. Diagnosing their damage may help determine the culprit and if treatment is needed.

In corn, assessing damage is much easier. Adult will feed on green silk which can affect pollination. There is very little, if any, defoliation. Like soybean, they tend to feed in groups making scouting more difficult but spot spraying more effective. It takes an average of 3 adults feeding on green silks/plant before there is economic concern.

Adults are going to be present until late-summer. During this time period they will feed, mate and lay eggs. Eggs will hatch this summer and the immature grubs will feed on roots of grasses and several other hosts. Japanese beetles overwinter as immature grubs which occasionally cause damage to seedling corn in the spring. 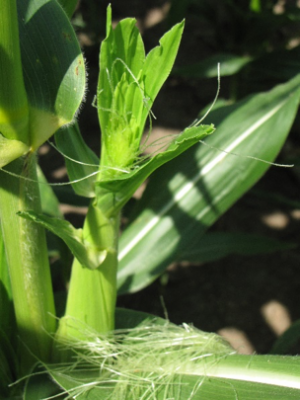 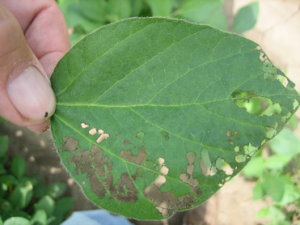 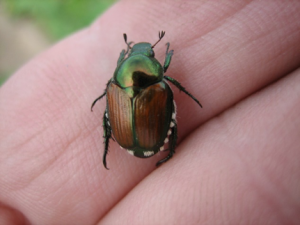