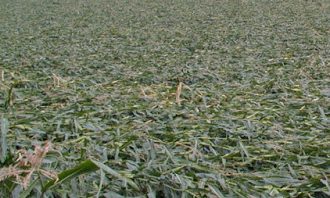 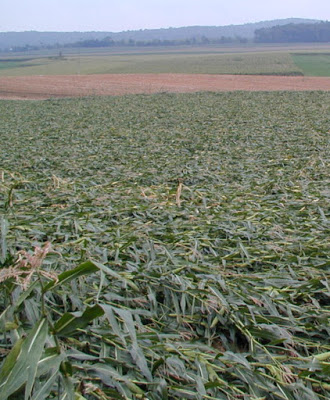 Flood water from streams and silt can be a source of pathogens. Flooded corn grain is “adulterated” grain. Farmers are strongly encouraged to work closely with their veterinarian and animal nutritionist when determining which vaccination and feeding protocol to use to further protect the herd from possible health issues associated with feeding flooded crop material. Flooded crops should be stored separately from the rest of your feed. In cases of production problems, this allows for feeding or disposal options without affecting your good feed.

Fields that have lodged at denting (R5) might “goose-neck” back upright if they are still green. However, high yielding heavy ears may prevent the stalks from straightening at all. Fields should respond to any straightening within 7-10 days

Some things to consider as we head into corn silage harvest season:

Identify fields that are at greatest risk and harvest these fields first. Fields which experienced late season stress or disease would be prime candidates for early harvest.