Alfalfa weevil eggs are probably starting to hatch in southern Wisconsin. Although usually considered an occasional pest, there seems to be isolated areas of Wisconsin that receive economic damage each year. Damage from early instar larvae can be hard to spot right now unless you look closely at the terminal portion of the stems and within folded leaves. As larvae grow, damage will be more noticeable.

Alfalfa (42° F) and alfalfa weevil (48° F) have different base developmental temperatures. In a normal year, we expect peak larval feeding around first crop harvest. A well-timed harvest often eliminates weevil damage. Call me crazy, but I don’t think the 2019 growing season is starting out “normal”. A concern at this point would be that alfalfa development is ahead of weevil development. A late egg hatch can shift peak damage from first crop to early second crop. In fields with a history of weevil damage and/or fields with higher than normal first crop damage, consider scouting second crop regrowth for damage to buds and regrowth. If windrows are left for an extended period of time, damage will often be more severe under the protection of that windrow.

Verify presence of weevils in those fields that may not be regrowing as quickly as expected. Unless it is a cool/cloudy day you may not readily find them. Look under leaf litter, cracks in the soil or at the juncture of the crown and soil. If weevils are the cause of slow green up you will find them. A threshold does not exist for this damage, rather you will have to use your best judgement based on amount of damage and larval populations. For alfalfa that has regrown, the economic threshold is 50% tip feeding. Make sure larvae are present before spraying. 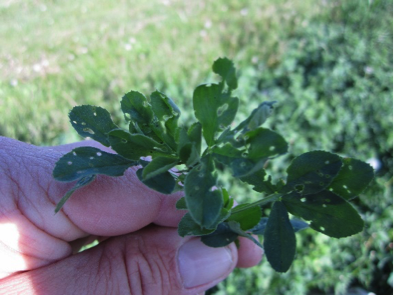