Bryan Jensen, UW Department of Entomology and Division of Extension

I have been getting a few questions regarding late plantings and what we might or might not see from insects. Although I will provide a few thoughts please keep in mind there are a lot of variables.

We’ve had significant flights of black cutworms in some locations this spring. So far, I haven’t heard about a lot of damage. However, late planted corn does concern me a little. In a typical year we will have several generations of black cutworms/year but only the first generation causes damage to seedling corn. This year late and very-late planted corn could be susceptible to these later generations that may have increased in numbers from the first generation.

I am not sure where armyworm damage might fit with late planted corn. Remember the adults migrate to Wisconsin each spring and we’ve had some heavy moth flights already. Late planting will not affect the overall armyworm populations. However, if there is an effect, it will be that the corn will be smaller if infested by the spring generation. It is too early to tell what, if any, effect late planting will have on the summer (2nd) generation.

European corn borers overwinter in Wisconsin and their development is driven by temperatures not planting date. Typically, first generation European corn borer doesn’t survive well on late planted conventional corn. However, second generation can be more attractive to these late planting dates. European corn population have been at a historic lows so I doubt there will be any widespread damage on late planted corn. The warning might be what is happening in the immediate landscape. If all corn is planted late, I think there will likely be a dilution effect on corn borer population. That is, all fields will be equally attractive to the small number of moths. However, if there are only a few late planted fields in an area, those fields could attract significantly more female moths to lay eggs. But again, European corn borer populations have been extremely low, I doubt there will be any widespread problems but perhaps some localized problems. 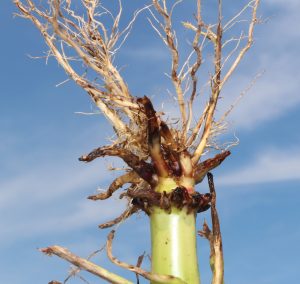 Corn rootworms could be an interesting insect to watch this year. Like European corn borer, their populations have been very low. However, I have seen late planted corn with significant root feeding because its root mass is smaller at the time of egg hatch. That is to suggest a similar population of rootworm larvae will consume a greater percentage of roots on a later planted field versus one which was planted on time.

Adult rootworm beetles are influenced by planting date. Pollen and fresh silks are an important food source for female beetles which readily move within the landscape to find the most nutritious fields. I doubt there will be significant problems if most of the corn within an area has similar planting dates. However, like European corn borer, a small number of late planted fields may attract a substantial number of beetles from nearby fields. The concern is two-fold. First, these late planted field can

experience significant silk clipping which may result in poor pollination. Furthermore, if this migration occurs during the oviposition period (mid-August to early September), significantly more eggs can be laid within that field and create a higher potential for root feeding if corn is planted the following year.

Western bean cutworms may be the wild card and their influence may depend on what is happening in the immediate landscape. Western bean cutworms overwinter and adults are starting to emerge/oviposit at approximately 1325 degree days (Base 500 F). What should you expect? Adult female moths are preferentially attracted to late vegetative corn to lay eggs. Expect a dilution factor if there are similar planting dates within an area. Expect significantly higher western bean cutworm population if there are few late planted fields during the egg laying period. It will be a timing and availability issue.

During a typical soybean planting season only the very early planted and/or late planted fields are subject to seedcorn maggot injury. Same goes for corn, however, soybeans are more susceptible to injury. I am a little concerned that a larger portion of soybeans may have been planted during the second adult flight period. Insecticide seed treatments usually provide adequate control. However, if insecticide seed treatments were not used, there is a possibility of increased damaged in late planted fields. Especially if planting coincided with peak adult flight and/or cool weather delayed emergence. There are no effective rescue treatments for seed corn maggots. Field symptoms includes poor plant stand AND foliar symptoms including, snakeheads, scarring of the cotyledons and holes in the unifoliate leaves.

The only concern regarding Japanese beetles is to be aware of the crop stage when they do infest soybean. Remember vegetative soybeans are more resilient than reproductive soybeans to feeding.

Two-spotted spider mites are not directly influence by crop stage. More so by the environment. Hot/dry weather will be the driving factor for their populations. Be careful what you wish for!

Soybean aphid may be an insect to be concerned about. However, a lot of time will pass before we know for sure. Late planted soybean fields typically have higher soybean aphid populations that can remain higher for a longer period. Arguably, soybean aphids are one of the more difficult insects to control economically because of seasonal aphid abundance, crop stage, environment factors and/or beneficial organisms.

My final comment is appropriate for both corn and soybean. During an unusual year, unusual things happen. Expect the unexpected.