Bryan Jensen, UW Department of Entomology and Division of Extension

Although not currently found in Wisconsin, the soybean gall midge was detected in 66 counties in Nebraska, South Dakota, Iowa and Minnesota (Figure 1) during the 2018 growing season. It is a new soybean insect pest that was essentially unknown prior to last year. Yield losses on some of the heavily damaged fields was near 100% w/in 100 feet of the field border and damage decreased to 20% at 200-400 feet from the edge. My point is not to unreasonably alarm people but rather to indicate a potential problem we need to be looking for. 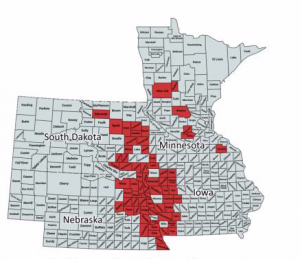 Adult soybean gall midges are about ¼ inch long with dark and light-colored banding on their legs. Damage was more severe along field edges indicating the adult is a weak flier that migrates from field borders. Eggs are usually laid at the base of the soybean plant and several larvae, which are not very mobile, can exist at a single feeding site. Larvae are initially translucent but turn orange as they mature. Swollen stems (galls) and darkened feeding areas are often the first symptoms. After prolong feeding, larvae can girdle the plant which are easily snapped off at the base. Symptoms of plant necrosis were first found in late-June through early July 2018. Frequency and severity increased through August. Perhaps there are two or more generations/year.

As you might expect, little is currently known about this new pest. For now, the best (and only) management practice is identification. There has been little correlation between frequency, severity, planting date and maturity group. Foliar insecticides have been tried but unsuccessful so far.

For now, please be vigilant and look for symptoms. Contact your local County Extension Educator, or Bryan Jensen (bmjense1@wisc.edu) if you find symptoms. 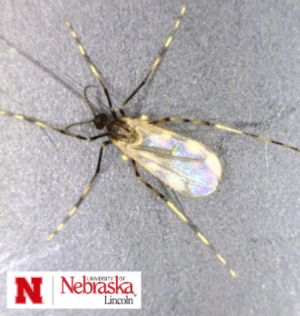 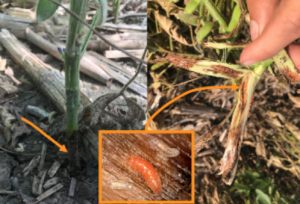 Note darkened feeding area at the base of the soybean plant on the left.  Plant on right indicates several feeding larvae. Inset is a single larvae.  Photo courtesy of Dr. Justin McMechan, University of Nebraska.