Two-spotted spider mites (TSSM) have been a difficult one to predict this year.  Early season drought conditions really concerned me.  Lately, spotty rains seemed to slow generational time in areas receiving rain.  However, other areas continued with the dry weather.  As I write this article the extended forecast calls for above normal temperatures and below normal rainfall.  I do think it will be beneficial for all to do some spot checking for mites and their damage.  This is one arthropod you do not want to play catch up with.   However, impatience and use of insurance sprays will create problems you don’t want to have.

TSSM overwinter in grassy areas and typically infest fields from the margins or may spin tiny threads which can carry adults further into a field.  Adults are very small (0.3-0.4 mm) and range in color from pale yellow to brown.  They will have 8 legs and have two spots.  Immatures are either six (larvae) or eight legged (nymphs).  Eggs are small, spherical and light colored.  All life stages are found primarily on the undersides of leaves.

During typical summer temperatures TSSM may go through a generation in 14+ days.  However, under optimal conditions (hot and dry) that generational time can be reduced to approximately 7 days.  Sex rations are variable, but favor females. 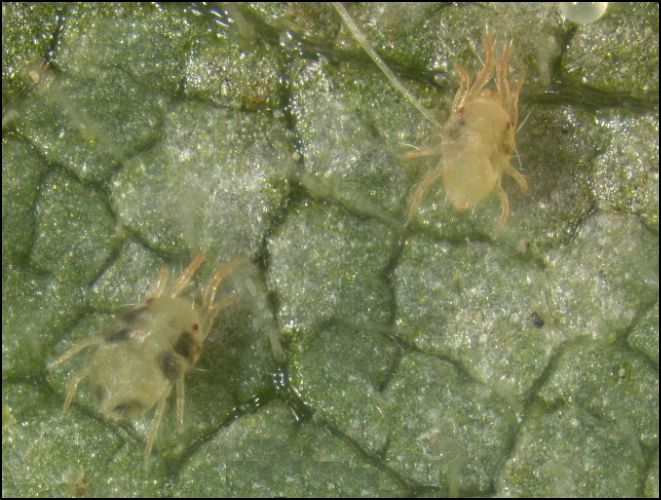 TSSM damage plants by penetrating cells with their mouthparts and sucking out the contents.  Symptoms first appear as stippling and progress to yellowing, bronzing and, eventually on soybeans, leaf drop. These symptoms are often mistaken for drought.  Under high populations webbing may also be present.  Although “spider mites are where you find them”, infestation typically start along field edges or in drought stressed areas of the field.

There are several predators which can help keep TSSM populations in check under favorable conditions and are a primary reason why broad-spectrum insecticides should only be used when necessary.  Not as insurance applications or at subeconomic populations.  Other mortality factors include heavy rains and high humidity.  A return to cool weather will also slow generational time.

Scouting for TSSM should include both observing the crop for symptoms and looking for the mites themselves.  Familiarize yourself with early symptoms of mite injury which is often called stippling and is best described as small, discolored spots on the leaves.   Spider mites are small; however, detection can be aided by taping leaves onto a white sheet of paper.  Dislodged mites will be relatively mobile and easy to spot on the white background.  Confirm identification with a hand lens.

Research has not been conducted that can be used to calculate a treatment threshold based on numbers/plant.  Treatment in corn should be considered if damage is visible on the lower plant and active mite colonies are active in the middle 1/3 of the plant.  For soybean, the following treatment scale has been developed by Ken Ostlie and Bruce Potter, University of MN.

Yield reduction caused by leaf loss is permanent and cannot be repaired.  Therefore, spraying prior to significant leaf loss (stage 3 on the soybean scale) should be considered.  Consider future weather patterns before spraying.  If rain and high humidity are predicted in the very near future, consider rescouting in a few days and reassessing your management decision.

Scout for the presence of other insects (i.e. soybean aphids) before making TSSM control decisions.  Their presence/absence may influence your product selection.  True miticides will not control insects.  Bifenthrin, chlorpyrifos and dimethoate containing products will control both.

Some final thoughts.  Certain insecticides may indicate suppression (versus control) of TSSM.  These products will likely provide TSSM control that is unsatisfactory.  Thorough coverage is important for TSSM control.  Don’t scrimp on GPA and use nozzles designed for through coverage.  Don’t assume an application was successful.  Rescout when allowable and look for signs of resurgence.  If a respray is needed, switch mode of action.  TSSM are notorious for resistance and many labels will restrict a sequential application of the same, or similar, compound.   On soybean, look for secondary pest resurgence.  Soybean aphids may significantly increase after a TSSM application.