Is Land Rolling a Practice for Wisconsin Crop Production?

Land rolling is the practice of pulling large cylindrical rollers over fields with the objective of smoothing the ground. Typically the practice is conducted just prior to or after seeding soybean, but some producers have conducted rolling well into the season over relatively large plants. The rollers press stones into the soil and break up corn root masses to provide a smooth, uniform surface area for harvesting. According to Mahdi Al-Kaisi of Iowa State University land rollers may cost over $50,000, with an average cost of $6.55 per acre according to the Iowa State Custom Rate Guide 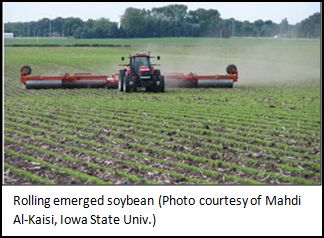 Reported benefits of rolling include fewer machinery problems because soil and stones are not picked up and therefore damage to the cutting bar or components within the combine is avoided. The smoother surface allows for the lower setting of the head permitting the harvest of low hanging pods. Producers that use the practice claim less stress when harvesting and the ability to harvest at somewhat greater ground speeds. Concerns include the cost of conducting the rolling operation, the moderate compaction of the soil that may affect emergence or damage plants if emerged, the potential for greater runoff because of reduced infiltration from surface compaction, and the loosening of crop residue that may be blown off the field. Research studies examining rolling have not shown consistent yield benefits.

The practice of land rolling is more common in states just to the west of Wisconsin. Evaluations were recently conducted in Iowa by Mahdi Al-Kaisi of Iowa State University and Jodi DeJong-Hughes of the University of Minnesota. Jodi presented her findings at the recent Corn Soy Conference in Wisconsin Dells and together they published an article in Iowa State’s Integrated Crop Management News in January 2011. The result of their studies presented in the accompanying table did not show a yield response relative to rolling, with the exception that rolling when plants are at the 6th trifoliate stage reduced yield because of plant damage.

Currently no research on land rolling has been conducted in Wisconsin. Like any soil management practice growers should consider the associated costs and benefits associated with the practice. Research has not demonstrated that land rolling will produce a positive yield response, but my conversations with growers that have adopted the practice indicates a general satisfaction that they see relative to harvest management efficiency and reduced potential for machinery damage. Beyond the cost issue, the major concerns that exist with rolling are the potential for increased runoff and erosion from reduced infiltration and the loss of residue by wind once loosened by the rolling operation.