Purple corn in late June, should you be concerned?

There are some corn fields in Western Wisconsin and perhaps elsewhere in the State that have the purple colorations associated with P deficiency (Photo 1). Growers with these fields are concerned that their P fertilization strategy failed this year. However, field conditions should be considered before jumping to this conclusion. 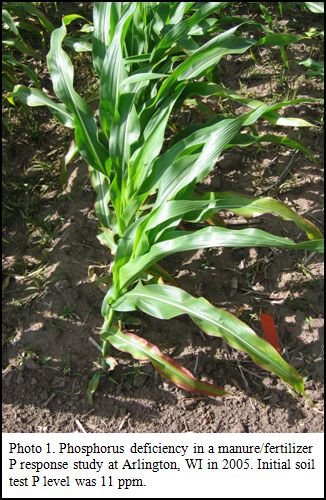 If corn fields are showing P deficiency on optimum or greater P testing fields, it is likely that limited root exploration of the soil is the “root” cause of the problem. Once the root system is larger, the P deficiency will be eliminated. While the weather cannot be controlled, growers should take actions to eliminate/minimize compaction to avert temporal P deficiency problems in the future.