Last night, July 11, a storm rolled through southern Wisconsin and northern Illinois causing corn to flatten (lodge) in the field. Lodged corn can be seen in a 30-50 mile east-west swath from Grant County to well into Walworth County.  It is unclear yet, as to whether entire stalks lodged or whether stalk breakage (greensnap) has occurred. Most likely it is stalk lodging. All hybrids (conventional and transgenic seem to be affected equally). Most plants did not have brace roots yet. We will review yield data for both situations.

Corn root lodging often occurs during the mid-growing season, when soils are saturated by heavy rainfall and the rainfall is accompanied or followed by high wind speeds. Often, entire corn stands are blown down. Initially, producers are concerned about how much recovery they can expect and potential losses from mechanical harvesting root-lodged corn. After a few days, the plants usually grow upward so that the upper stalk is vertical, but curvature occurs in the lower stalk area. Grain yield losses in conjunction with lodging can be attributed to (i) inhibited uptake and translocation of nutrients, primarily when lower-stalk breakage occurred; and (ii) reduced light interception, despite lack of any apparent stem injury. Wind lodging of corn is most likely to occur when plants are in mid-vegetative stages, and have not yet developed adequate brace roots.

Carter and Hudelson (1988) simulated root lodging due to wind in a field experiment by saturating the soil with irrigation water and manually pushing corn plants over at the base, perpendicular to row direction. Treatments applied were a control and simulated wind lodging at V10, V13 to V14, and V17 to R1 stages in 1985 and V11 to V12, V15, and VT stages in 1986. Three hybrids were included. The upper region of plants straightened to vertical within two days following lodging, and lodging did not affect subsequent timing of plant development. The angle between the below-ear stalk and soil surface at harvest decreased from 73 to 85° with lodging at early (V10-V12) stages to 22 to 36 ° at late (V17-R1) stages due to more pronounced lower stalk curvature. This resulted in ear height reductions from 52 to 57 in. for controls to less than 30 in. when lodging occurred after V17. These results indicate that mechanical harvest of corn wind lodged during V10 to R1 stages will likely be possible, but slow harvest speeds may be necessary to minimize losses. Compared to hand-harvested grain yields of control plots, grain yield decreased (Table 1).

Rapidly growing corn is more susceptible to stalk breakage from wind as well as other physical phenomenon such as cultivation, hilling, or fertilizer application where stalks are bent by a low tool bar. Mid-season stalk breakage is a type of stem lodging also referred to as “greensnap” or “brittle snap.” This typically occurs a few nodes above the soil surface, at or below the primary ear node and usually occurs when stalks are moist and turgid. In general, treatments that cause plants to grow more rapidly enhanced susceptibility to stalk breakage (Wilhelm et al., 1999). Row direction, as well as planting dates and other cultural practices, have varying impacts on a crop’s ability to withstand the wind. Corn plant displacement by wind (regardless of wind direction) was greater perpendicular to the row direction than parallel to the row direction (Flesch and Grant, 1992). 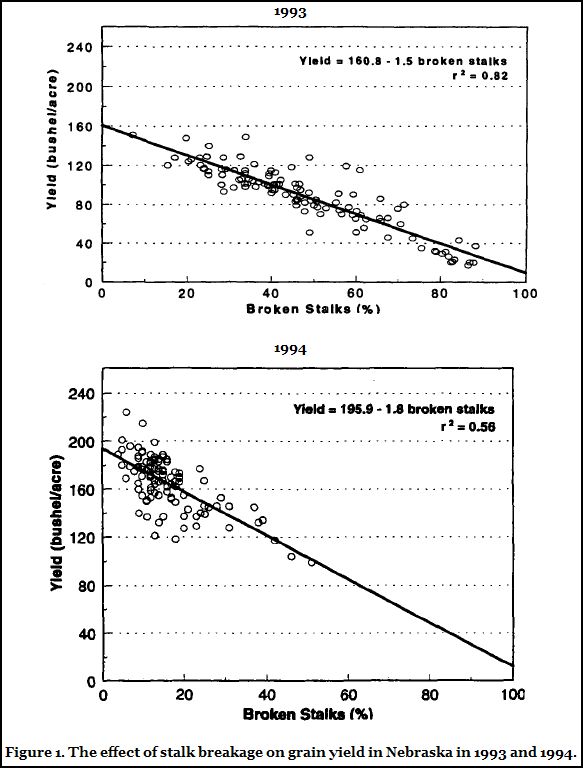 I was unable to find any data related to the need for foliar fungicides on lodged corn. The closest data was corn response to hail damage. Hail damage likely causes more problems than wind lodging due to bruising of leaves and stems. Fungicide application cannot recover yield potential lost due to damage. Fungicides protect yield potential by reducing disease. There are some diseases of corn that are favored by wounding, e.g., Goss’s wilt, common smut and stalk rot, but fungicides are not effective against the pathogens. The foliar diseases managed by fungicides (e.g., gray leaf spot, northern corn leaf blight, eye spot, and common rust on corn, and brown spot and frog eye on soybeans) are caused by pathogens that do not require wounds for infection.

A simulated hail-fungicide trial was conducted at Urbana in 2007, with corn plants being damaged with a string trimmer just before tasseling to simulate hail damage (Bradley and Ames, 2010). Some plots were left undamaged as well. The fungicides Headline, Quadris, and Quilt were applied to the plots and compared to an untreated check. When the data were statistically analyzed, fungicides did not significantly improve yield compared to the untreated check in the “hail-damaged” plots or the nondamaged plots (Table 2). The simulated hail damage alone did decrease yield by approximately 30 bu/A compared to the nondamaged plots, however.

Fungicides should be used as a “tool” (along with other IPM practices) – to control diseases that are present and/or almost certain to be a problem. Consider the following factors before spraying:

What do we do now?