Patience When Thinking about Planting Corn this Year

The weather this year has many farmers and agronomists wondering, “What if?” What if I had planted in March? What if I plant before crop insurance kicks in on April 11? What if I wait until “normal” planting dates?

Every year we recommend, when planting prior to April 20, that field conditions must dictate when we start planting. This year field conditions were right in March. The historical optimum planting date for corn is May 1 in southern Wisconsin and May 7 in northern. Every field and farm likely has slightly different optimum planting dates. We also know that delayed planting often results in lower yields as well as the “double-whammy” of higher grain moisture, which can be as expensive as lower yields.

Since 1991, we have conducted a planting date trial every year at the UW Agricultural Research Center in Arlington. We target May 1 as the optimum planting date and we plant as early as field conditions allow before that date and every two weeks after (May 15, June 1, and June 15). Often when we plant corn on the first date, there is still snow on the sides of the fields in ditches. 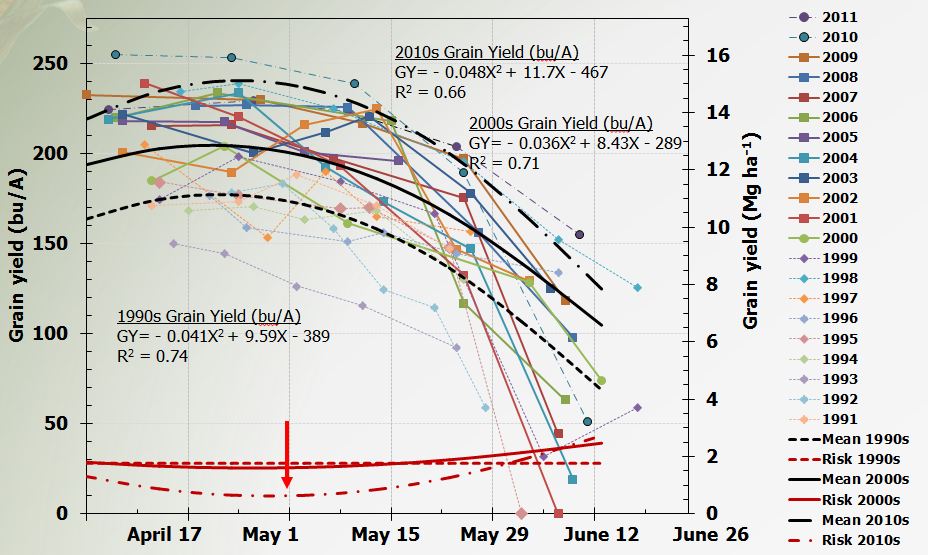 The earliest we have ever planted corn at Arlington was during 2010 in a trial designed to test the effect of seed treatments on early season stress (see report here). In that trial we planted March 31, April 14, and May 18. This was not a planting date trial since treatments were planted in side-by-side blocks by planting date, but it gives us some sense of what might happen with March planting. The average yield for each respective planting date among all of the treatments was 227, 238 and 227 bu/A.

Insurance coverage needs to be considered when thinking about when to start planting corn. For the latest on crop insurance see Mitchell (2012).

When planting early we are most concerned about the last spring killing frost. This has to occur before the growing point moves above ground after the V5 developmental growth stage (Abendroth et al., 2011). We don’t have to go too far back to remember the devastating effects of a late-killing frost that occurred on June 20, 1992 when most of the Wisconsin crop was between V6 and V8. Unfortunately, the last killing frost is difficult to predict and manage for.

Patience is key here. You only get one chance to do things right in a field. Be ready to go. Get as much of your spring work done as you can. Waiting until the crop insurance dates kick in is not unreasonable.