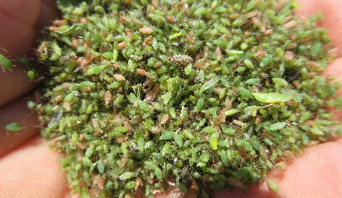 After several calls this week along with my own observations it is clear that pea aphids populations in alfalfa fields are much higher than normal. In some cases, that is an understatement.

Why are their populations so high? Do I need to be concerned? The first question is the easy one. Given suitable environmental conditions, pea aphids populations can increase exponentially by themselves. Without help from anyone or anything. No surprise there and yet another reason to be frustrated with some of the unseasonably cool weather. There is an old adage that hard driving rain can wash aphids off the plant. The important word to ponder in that sentence is “can”. Although driving rains can, they certainly have not in most cases this year.

Another commonality for some of the high aphid populations (but not all) has been the an earlier use of an insecticide. Most of our insecticides are broad spectrum and will kill beneficial insects. Their populations will not rebound as quickly as aphids. Therefore, high pea population can result. I have seen that happen several times in small research trials as well as in normal field situations. Combine the lack of beneficial insects along with weather that is conducive to aphids and you can make matters worse. Don’t get me wrong. When you are over threshold you need to do something. But throwing an insecticide in because it is inexpensive or because you think you might need it can create problems on down the road.

Now to discuss the difficult question. Do I need to be concerned? The easy answer is maybe. Pea aphids are considered an occasional pest and have a long established threshold of 100/sweep. Some of the consultants indicated that fields are to be cut soon so their current problem will solve itself. Cutting an established alfalfa stands leaves almost no green alfalfa tissue which aphids need to survive. Therefore, a significant majority of aphids will be killed. Cutting essentially resets the biological clock for that field. The lack of food along with the predicted hot and dry weather would make me think there would be few worries in the next cutting. But it is anyone’s guess if the cool weather trend continues??? Also, keep in mind if that alfalfa is to be used in a dairy ration that clock reset every 30+ days.

Based on past experience, I personally think that the established threshold of 100 aphids/sweep is on the conservative side. If that alfalfa field has other stresses (diseases, drought, etc.) then use the established threshold. However, under good growing conditions with few, if any stresses, I think that threshold could be raised without economic loss for either yield or quality.

A bigger concern right now is new seedings. Fortunately, some of the new seeds are being cut now. But unfortunately there is usually some green leaf tissue in the stubble that can support pea aphids (and potato leafhoppers). This is where the hot temperatures can come into play and keep the aphid populations in check. But perhaps drive the potato leafhopper populations up. Again, that is all dependent on weather. Sweep to be sure.