Alfalfa: When checking new alfalfa seedings for potato leafhoppers on the Arlington Agricultural Research Station (there weren’t many, yet) I could not help but notice a lot of pea aphids. A lot more than I would have expected during this hot/dry weather. Obviously, the previously cooler weather was conducive to aphid populations.

Aphid numbers were approaching the long-established economic threshold of 100 per sweep. Usually, I do not get excited with those numbers on established stands. Especially if we have good growing conditions. But this was in a new seeding and the weather has been both hot and dry. To me that is a little worrisome given the timeframe before cutting and the potential for aphid populations to build.

It is hard to estimate if this is a local, regional, or statewide problem. Or even if it is a problem. However, it is worth spot-checking new seedings a little ahead of when we typically monitor for potato leafhoppers.

There were a few parasitized aphids, some damsel bugs and lady beetle adults and larvae. Certainly, their presence/absence must be considered before making control decisions. Being this far ahead of the normal harvest you can really spike aphid populations by killing the beneficial insects. Be thoughtful with your control decision.

Wheat: There have also been some aphids found on wheat. Fortunately, it appears we are past the most susceptible crop stages of boot to heading. After heading is complete, aphids have rarely been a problem in Wisconsin’s wheat and the threshold is approximately 50/stem. One of the biggest reasons for lack of late season damage is natural enemies. In the wheat variety trials of Dr. Shawn Conley’s there was both parasitism and predation by lady beetles (adults and larvae), syrphids and damsel bugs. Probably more. It would have made for an interesting course lecture!

The most common aphid species found in Wisconsin are English grain aphid which are found on the head and the bird cherry-oat aphid which is more common on the lower leaves and found in groups. English grain aphids are light green with black cornicles, knees, and antennae. Bird cherry-oat aphids are darker green with a noticeable “rust “colored band at the tip of the abdomen. Both are capable of transmitting barley yellow dwarf but that is not the concern now— only the direct feeding damage. 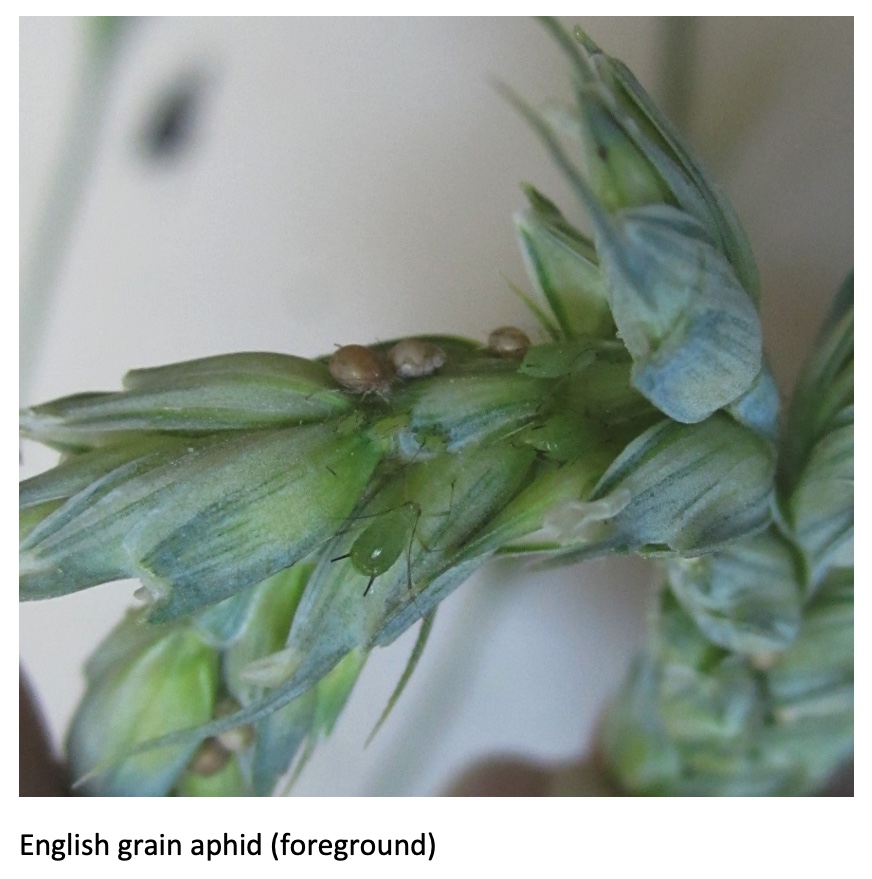