Unsettled weather with periods of rain prevailed this week, disrupting fieldwork but increasing soil moisture supplies for emerging crops. A complex of early-week storms brought beneficial rainfall of 1-2 inches to much of the state, while temperatures were at or below normal for this time of year. A few rain showers lingered into Wednesday evening before warm, drier weather returned, allowing farmers to continue planting the last acres of corn, oats, potatoes and soybeans. Corn planting was 89% complete and more than 73% of the crop had emerged as of June 5, seven days behind last year but one day ahead of the 5-year average. Alfalfa producers harvested a remarkable 38% of the first crop during the week, for a state average of 51% to date (with regionally higher averages of 60-70% across the southern crop districts). Meanwhile, apple growers are reporting vigorous foliar growth, good fruit set, and minimal tree stress in their orchards this spring. Prospects for the state’s crops are very favorable as of early June.

Surveys in first-crop alfalfa across southern Wisconsin indicate alfalfa weevil populations and defoliation levels are generally moderate, with a few higher pressure fields concentrated in the southwestern counties. Average counts in 72 fields have ranged from 0.1-4.8 weevil larvae per sweep (480 per 100 sweeps). Elevated counts above 2.0 larvae per sweep were recorded in approximately 20% of the fields.

Similarly, estimates of leaf tip feeding made by DATCP surveyors have exceeded the 40% economic threshold in 15% of the fields sampled (see map below). These higher pressure fields, located primarily in Green, Grant, Lafayette and Sauk counties have likely been harvested, but carryover of larvae into second-crop regrowth may be a concern. Routine scouting is encouraged until new growth is established.

The peak weevil damage period, which occurs between 600 and 800 degree days (sine base 48°F), is underway in southern and central Wisconsin and will begin next week in the eastern and northern areas. The base 48°F column in the degree day table provided on DATCP’s Pest Survey web page shows Beloit has accumulated 715 weevil degree days, Madison has reached 650 degree days, and La Crosse has 621 weevil degree days as of June 8. 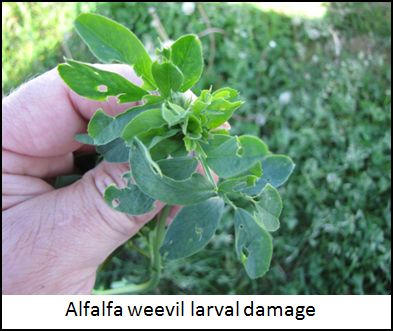 Across the lower half of the state where the harvest of first-crop alfalfa is beyond 50% complete, the early-season alfalfa weevil threat will subside as nearly all remaining fields are cut in the next few days. However, for north-central and northwestern Wisconsin, scouting for alfalfa weevil larvae and leaf tip feeding damage should be prioritized for the week ahead.