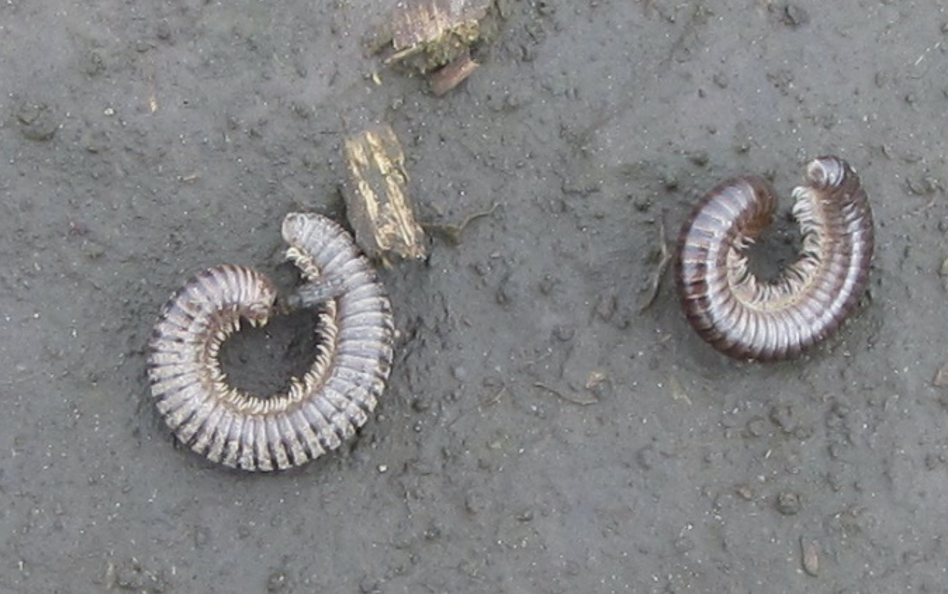 Let’s deal with this “critter” before the field season gets started. Millipedes are not an insect but belong to a class of arthropods named Diplopoda. That seemingly useless fact does have some importance. Insecticide seed treatments do not do a good job of controlling them. Not that they really need to! Millipedes are not considered a crop pest and usually feed on decaying organic matter. However, after two “moist” growing seasons I would expect their prevalence to be much higher than normal and perhaps a few (very few) situations where millipedes could be a problem.

Millipedes are small (¼ – 1 inch long), cylindrical and hard-shelled. However, unlike insects, millipede have numerous body segments and each segment will have two pair of unjointed legs. (See picture above of Millipedes, note the light fringe of legs.) The common millipede is dark-colored and curls into a c-shaped pattern. Wireworms larvae are the most common field crop insect pest which millipede are confused. Wireworms are also hard-shell but are copper colored, have 3 sets of jointed legs and are subterranean.

I mentioned millipedes are usually not considered a crop pest but feed on decaying organic matter. However, I could understand isolated situations when they could reduce germination or feed on seedling plants. Those field situations would have wet soil conditions, close to a marsh or other perennially moist habitat and fields with high organic matter content. Furthermore, cool growing conditions would exacerbate the amount of damage. I doubt millipedes would damage a significant amount of hard seed but the potential for damage does exist during that period of time between swelling and emergence. I have also heard of a few situations where millipedes feed on succulent above ground plant parts like soybean cotyledons.

There are many, many reasons for early season stand loss and millipedes may be just a by-stander in these situations. Avoid jumping to a conclusion using the “guilty by association” syndrome!