The Wisconsin DATCP agency has reported a few Wisconsin locations with intense black cutworm moth captures, as have several other Midwest states.  Although trap captures do always translate into field damage, it does give us advance warning of when to start field scouting.

Black cutworm larvae (picture below) are a little difficult to identify because of the lack of markings which jump out at you.  Identification can be made by looking at the larvae and the damage they cause. Black cutworm larvae are shades of gray to near black. 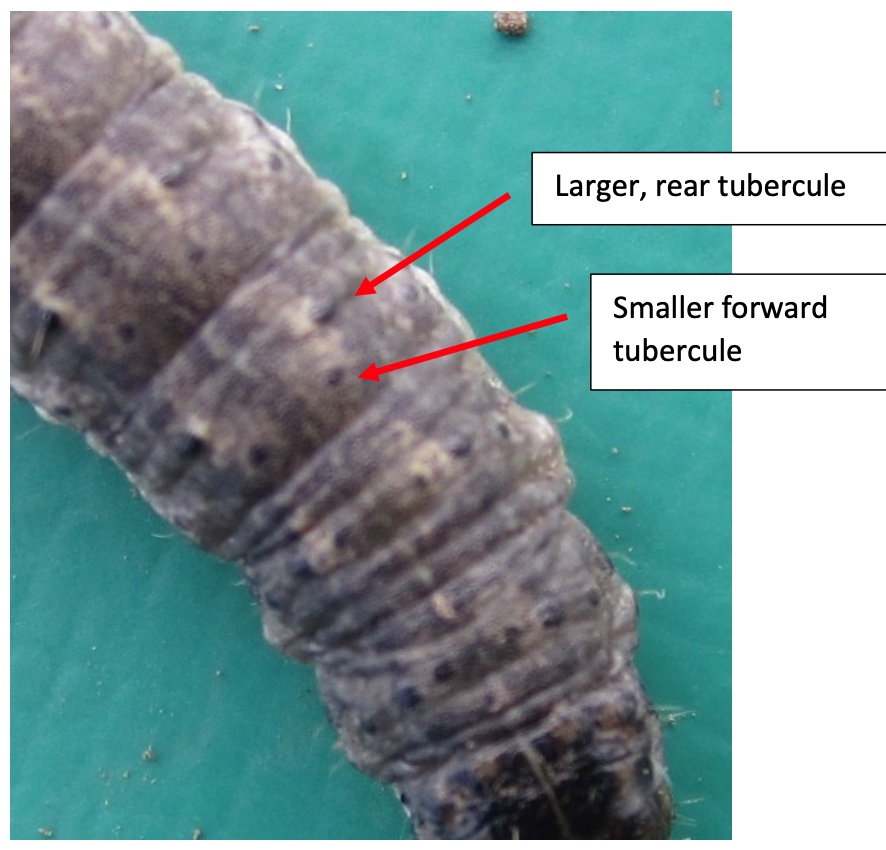 Small larvae damage emerging corn by feeding on leaves or cutting plants at soil level.  This damage will not reduce the plant stand until the corn and larvae are more mature. At that time, larger larvae will burrow into the corn below ground level and feed at the growing point. Furthermore, a single larva may feed on several plants before pupating. This obviously reduces plant stand. Above ground symptoms at this point are often called dead-heart or wilted whorl because the newly emerging leaves are wilting.

The value of recognizing black cutworm injury when both larvae and corn are small is that it gives you time to prepare and react if/when needed. Once corn has reached the V5 stage of development it is more resilient to feeding and larvae tend to remain on a single plant.

The DATCP pest bulletin predicts a June 3 date for cutting plants in southern Wisconsin and is based on arrival of the migrating adults and expected accumulation of degree days. Remember that is an estimate based on the best information currently available. Actual weather and planting date should also be considered. My preference is to “sleep with the light on” and start spot checking before that date.

You can increase your chances of finding cutworms by scouting fields with significant winter annual weed populations, broadleaf cover crops and corn planted after soybean. Low lying, areas of field and near streams may also increase your chances of finding damage. Fields with above ground Bt traits may suppress black cutworm feeding.  Do not ignore these field when scouting. Consult the 2020 Handy Bt Trait table for guidance on trait packages.

The threshold for treating black cutworm is to consider treating when 2-5% of the plants are damaged. Size of corn should be considered as well as size of larvae. If cutworm larvae are larger than ¾ to 1 inch please consider what your “preventable yield loss” will be. Suggesting most of the yield loss has already occurred and your rescue treatment may not provide a return on investment.

Larvae are not considered mobile so spot treating fields should be considered if damage is isolated. Whole field treatments should be based on accurate field scouting.  Walk fields in a W-shaped pattern and examine 50 consecutive plant at each of 5 random locations. If that seems like a lot of work, remember that you don’t make nutrient recommendations based on one soil core. To view insecticides labeled for black cutworms on corn consult A3646, Pest Management in Wisconsin Field Crops 2020.

Finally, dingy cutworms are a black cutworm look-a-like but are not considered an economic pest on corn.  Dingy cutworms can be found in mixed population of black cutworm or all by themselves.  They overwinter and larvae may appear to be further along in their development than black cutworms, so don’t get too excited if you find larger than expected cutworms. Unlike black cutworm they are consider a “climbing” cutworm. That is, damage is usually confined to leaf feeding not cutting. Identifying characteristics are best seen on larger larvae and may require a handlense. Each species will have 4 black “tubercles” or spots/segment on their backs. On dingy cutworms these tubercles will be similar in size. On black cutworms the two tubercules closest to the head will be smaller than the tubercules to the rear (See picture above).